Jaadugar Review Punchline: Jitendra Kumar gave a stellar performance as a magician turned soccer player, but the script was so bad that no matter how stunning he was, this movie was born to be doomed. Not a start that Jitendra Kumar would have hoped for at the starting of his career as a full-fledged main character in a movie. 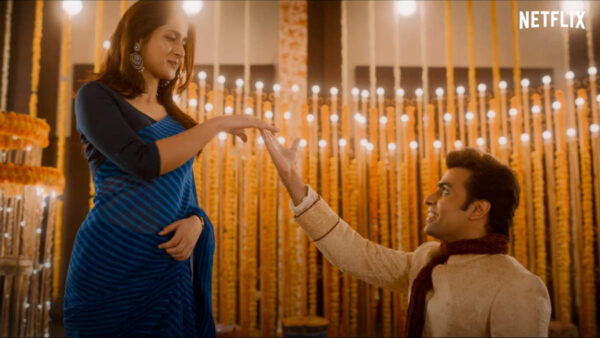 Jaadugar Story: The movie has a simple and archaic plot that viewers have seen quite a lot of times. It revolves around a man who has been given a task to accomplish in order to be with his lover. Jitendra Kumar plays the role of a small-time magician who is appointed as one of the players of a football team in an unknown village. If he brings glory to the team, he wins the chance to be with his girlfriend. Will he be able to do the unthinkable with a bunch of misfits for the town’s soccer team becomes the core of this film.

Netflix’s latest addition to the movie category is a long and tedious affair that many viewers would not want to dedicate their time to. From the get-go, the excitement that should have been there is missing. As the movie rolls, the viewers find themselves taking a ride devoid of thrill and pleasure. Everything is predictable and lacklustre in this Sameer Saxena’s directorial.

A few moments of respite that the audiences get is by watching Jitendra Kumar and Jaaved Jaaferi on the screen. Both actors have lived up to their reputations, but the script has let them down both. You will find Jitnedra occasional endearing, but you can never get behind him as a fan of his character in the movie. The filmmakers have made a hodge-podge of what little was available to them. The illusion that the movie should have woven on the audience is not present in the film at all. A tried and tested story like Jaadugar could have done much better if the movie had tried to build on the moments instead of the whole plotline. The film never takes its moments to the next level. What could have been turned into something amazing is left bland and unmarketed.

This movie is for those who are die-hard fans of Jitendra Kumar since his hard-hitting performance in Kota Factory. One thing that works in favour of audiences is the direct OTT release of the movie. So, if you have a subscription to Netflix, you can watch it if you want to without the fear of losing your hard-earned money on something not entertaining.

Blurr Review: Taapsee Pannu's Blurr is an exciting and restless horror thriller that draws you in and makes...