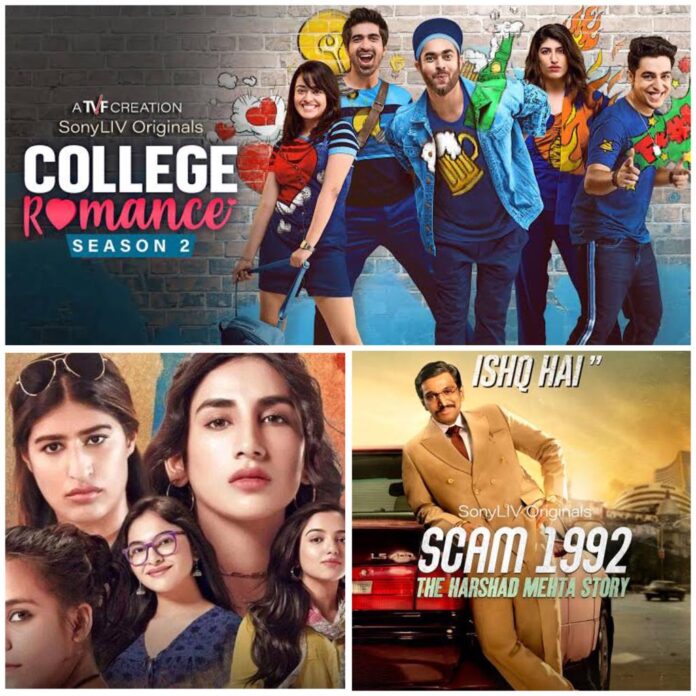 The arrival of web series has truly altered our views, desires, and aspirations. It is a blessing in our lives. These amazing online series keep us engaged. On-demand platforms like Netflix and Amazon Prime have grabbed our attention. When selecting an OTT platform to watch any engaging content, these are the top and most obvious options. However, other OTT platforms, such as SonyLIV, offer some web series with very unique and exciting concepts.

Here is a list of the Best Web Series on SonyLIV:

TVF, known for its outstanding works, has accomplished it again with this beautiful web series on Song LIV, which depicts a middle-class family and their heart-wrenching times, challenges and struggles, highs and lows, and every other noteworthy manifestation of their lives. The series has three seasons and has given us an exceptional performance from the entire cast to admire and keep us interested.

A great online series to watch that is related to the modern millennial generation and reflects their present situation. It depicts the good and bad days of hostel students’ lifestyles, as well as the ties among roommates. Moreover, this web series on Sony Liv is a refreshing piece of entertainment and portrays the lifestyle choices of modern and bold girls.

The core theme revolves around a rarely mentioned area of Indian scientific advancements and a brief discussion of India’s post-independence socio-political situation. Thus, learning about Dr Homi J. Bhaba and Dr Vikram Sarabhai, two of India’s great science geniuses, and their lives, challenges, hardships, and victories is a joy to witness. It is one of the best web series currently on SonyLIV.

Read More: TV Series Like Rocket Boys That You Can Binge Over The Weekend

This magnificent Harshad Mehta masterpiece stands out in every area. A biopic that grabbed our attention from start to finish is as impressive as the “Big Bull” of Dalal Street. Moreover, the series is a perfect combination of a brilliant screenplay and amazing skills by the actors, which helped the series become the most loved by audiences of all ages. What are you waiting for if you’ve not seen this combination of authority, wealth, desire, and ups and downs? Go see the masterpiece on SonyLIV.

The student zone is simply tied to all of us, and the show depicts very cheerful moments of college life. Therefore, the concept is creative and engaging, and it’s one of the best and highest-rated web series on SonyLIV. The supporting characters added to the comedy of the scenes. Each episode dealt with a distinct scenario and theme.

A brilliantly presented political web series where Karan Sharma perfectly emphasises Bihar politics and everything that happens in the cruel world of politics. Huma Qureshi’s performance as Rani Bharti is mesmerising, proving that women can do it all, from housekeeping to being Chief Minister, and the rest of the crew roles are a must-see.

A patriotic screenplay produced by Raj Acharya centred on an Indian surgical strike against Pakistan. Lately, we are more interested in watching patriotic movies, and Avrodh is definitely the best. It emphasised not just the terrorist plans but also the involvement of reporters and media, political interference and other issues. With two seasons, this SonyLIV web series is a must-see.

Since the beginning of time, human society has battled with the notion of personal duty for high human principles such as fairness, justice, and honesty. “Tabbar” is a unique portrayal in which the central character goes to any extent to protect his family. It is a must-see show that depicts Punjabi family values and customs.

Sixteen is about communicating a societal message and also creating a sense of suspense. A group of 16-year-olds is planning to take revenge on the rapists. In the meantime, the officials want to take action both against the rapist and the sixteen. Watch this powerful story on SonyLIV to determine whether the operation is effective.

If your purpose in watching web series is to bond with the viewer’s brains and kindle the viewer’s mental process, Undekhi will do an excellent job. This SonyLIV series depicts two sides of society: powerful people who think they can deal with everything and oppressed people who have suffered from years- of unfairness and abuse and have now chosen to demand justice.

Previous article
8 Most Underrated Bollywood Sports Movies that will Inspire You
Next article
Jaadugar Review: Jitendra Kumar’s Magic could not Spellbind the Viewers
Flickonclick Team

Shark Tank India is one of the most popular and exciting reality TV shows on Indian television. The...