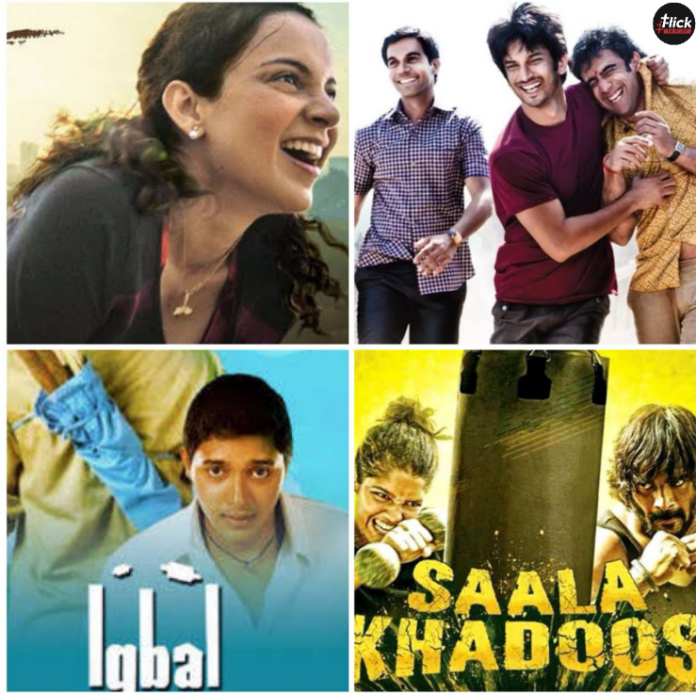 Bollywood sports-based films are a must-see for Indian audiences since Bollywood and sports are a good combo. They not only have a long-lasting effect on people’s views, but they also attract spectators of all ages. Although Bollywood made many blockbuster sports movies, but some of its productions have flopped badly.

8 Underrated Bollywood sports movies that you should definitely watch:

The film’s subject is centered on the Foundation Of A Game, in which young Kapil Dev is given the chance to lead Team India. The all-rounder, popularly known as the Haryana Hurricane, has instilled new zeal in the squad. Since 83 is based on a famous tournament, recreating the matches with the same authenticity was not achievable. Unfortunately, the unfocused cinematography and uneven editing degraded the film. Despite such an inspiring story, this Bollywood sports-based movie was underrated.

When it comes to neglected films, another gem may be found on our list of Bollywood sports movies. The common audience disregarded this film, and it did not perform well at the box office. R. Madhavan portrays a former boxer who never made it to the main stage due to a conflict with the local authorities over latent politicians. After a few years, he returns to the ring as a trainer rather than a fighter. He trains a fisherwoman to accomplish his wish of winning the World Boxing Championship. Moreover,  Saala Khadoos demonstrates our country’s reality, in which it is still difficult for a woman to build a reputation.

The story revolves around 13-year-old Karan (Zain Khan)  who discovers a magic bat, with which Kapil Dev earlier struck an undefeated 175 against Zimbabwe in the 1983 World Cup. As a result of his magical bat, Karan becomes the best cricketer and smashes the Pakistani’s fast bowler in a bilateral series. The film was a flop due to its irrational concept.

The plot is centered on three friends who decided to build a training school to develop the country’s next cricket champions. Kai Po Che, starring Sushant Singh Rajput, performed poorly at the box office.

Also Read: 10 Best Indian Hockey Players of All Time that will Startle You with Their Achievements

Bollywood has produced many jewels, although not all of those have been favorably received by viewers. Iqbal is one of those underrated movies. Iqbal, like every other Indian boy, aspired to be a cricketer, but what distinguished his story from others was his inability to talk and hear. Despite numerous obstacles, Iqbal achieved his purpose which was the beauty of the narrative.

Panga is based on the life of an Indian National-level Kabbadi player. Kangana Ranaut and Jassie Gill starred in the film. It chronicles her accomplishments, struggles, and victory over preconceptions. Moreover, It also illustrates the importance of family support and love in achieving success. Despite being a lovely narrative it is one of the underrated Bollywood sports movies.

Rashmi Rocket is a story about a small-town girl who transcends all societal hurdles to become a national-level athlete, but her triumph is jeopardized when she is asked to take a sexuality test. It is the latest underrated movie starring Taapsee Pannu.

The story revolves around Veera (Rani Mukherji), a  girl who lives in a little village but dreams of playing cricket in the national league, so she cross-dresses and becomes male Veer to make it to the cricket squad. This Bollywood sports movie was underrated at the box office.

Read More: 10 Bollywood movies you would not want to watch with your parents