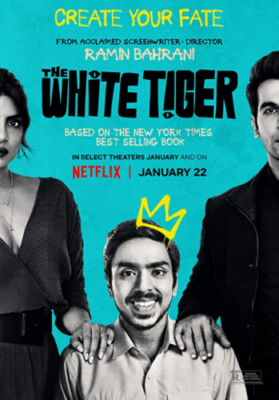 Caught the Monday blues and wish to distract yourself from the week that lies ahead? Here is a movie that is bound to inspire you for the rest of the month to fight against all odds and achieve whatever you want in life. The Netflix original White Tiger is winning hearts, and you should find out why as well. 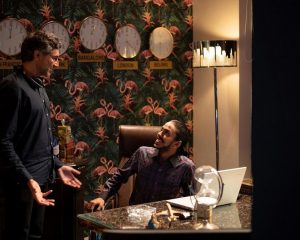 Starring our forever favourites like Priyanka Chopra Jonas, Rajkummar Rao and newbie Adarsh Gourav, this movie has been awarded 4 out of 5 stars from most reviewers, this gripping adaptation of the novel by Aravind Adiga, The White Tiger has been getting a lot of praise from everyone recently.

This Booker Prize winner turned film by Ramin Brani is considered one of the most successful literary adaptations of the year. Adarsh Gourav’s phenomenal and unexpected performance is also the reason for its assured success.

The movie follows the story of a poor driver, who tries to pry his way out of the caste system and servitude. The system which tries to keep the rich cozy and comfortable in their high palaces and the lower caste struck with poverty, is being challenged in this plot.

The film mostly relies on narration, but its cinematography gives a very satisfying depth to the characters and their backdrops.

Adarsh Gourav is seen as Balram Halwai, a smart and ambitious, who was bound to work forever on his family’s tea stall, after gaining an opportunity transforms himself into a driver.

After learning how to drive and mastering the skill, learns how to flatter the upper class as they like, and sets out to work for Ashok (Rajkummar Rao).

Always loyal to his bosses, his trust is betrayed when they aren’t loyal to him. This is followed by the release of suppressed anger kept-in for generations for the unfair treatment given to the lower class. This movie contradicts the nature of Ramin’s early movies, as it is more cynical and harder.

You don’t need to be empathetic to always be faced with hard-hitting facts, hence why, the theme of the movie is serious and more cynical than ever.

Watch the journey of a boy from the poor sections of the society struggle his way up the societal ladder, dealing with adversities like poverty and lack of opportunities but still able to beat his way to the top and becoming an entrepreneur.

An inspiring movie based on the outstanding novel written by Aravind Adiga, The White Tiger is a must watch on Netflix.

Are you tired of the Indian shows which have started to become predictable with their storylines and want...
Entertainment

Squid Game Season 2 Release Date on Netflix in India is becoming apparent since Netflix confirmed it via...