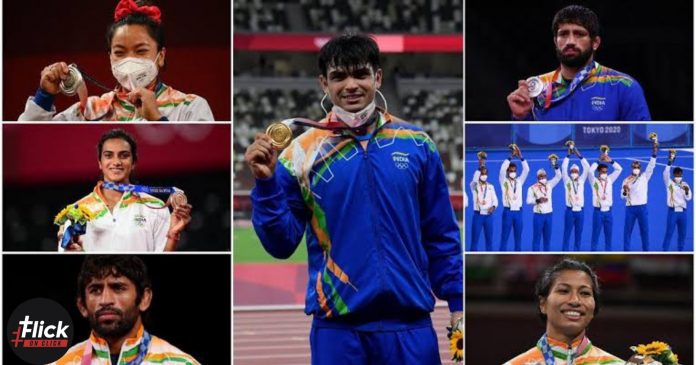 Achievements in sports are unfortunately neglected at times, save for the few times a sports figure makes it significant in the news. We must always make a conscious effort to recognize and remember the ones that bring glory and respect for India by achieving the status of Olympic medal winners for India in Olympics 2021. 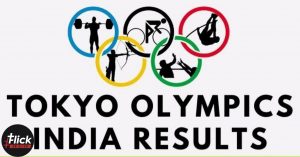 So here we are, with the stories of 7 Olympic Medal winners for India in Tokyo 2021 : the ones who have reached incredible heights with their magnificent skills, talent, and hard work.

Buckle in; this is going to be one long list! We won’t just tell you their names and leave it at that. Instead, we’re going to say to you in brief about each one of them so that you may understand them much better.

Stories of each Olympic Medal Winners from India in Tokyo 2021

India started the very first day of the Olympics with a victory. This victory has been long-awaited by many, a medal under the weightlifting category. At last, this dream was fulfilled by Mirabai Chanu, who, as mentioned above, brought home a silver medal for India in Tokyo 2021.

Mirabai Chanu is a 26-year-old from Nongpok Kakching village at the foothills of Imphal East district in Manipur. She won the medal after she lifted a total of 202kg (87+115kg).

She won the medal and set a brand new Olympic record with a successful lift of 115 kg in clean and jerk.

She has truly made all of us proud.

PV Sindhu, the ace shuttler from Hyderabad, beat China’s He Bing Jiao 21-13, 21-15 and proceeded to win the bronze medal in the women’s singles competition.

Thus, she became the first Indian woman and the second Indian athlete that won two individual Olympics medals. The first athlete who achieved this feat was Sushil Kumar.

After winning the match against He Bing Jiao, she became the fourth player in Women’s singles badminton to claim two medals at two consecutive Olympic games to add to her list of achievements.

After Vijender Singh in 2008 and Mary Kom in 2012, Lovlina has become the third Indian pugilist to win a medal in boxing after nine years.

She defeated China’s Nien-Chin Chen during the quarter-finals this assuring herself a medal no matter what. However, in the semi-finals,  she lost 0-5 against world champion Busenaz Surmeneli, returning home with a glorious bronze medal.

She is just 23 years old, from Barpathar village in the Golaghat district of Assam, and has done brilliantly in her Olympic journey so far. We wish her luck in her future endeavors.

Ravi Kumar Dahiya, a 23-year-old from Sonipat, is the second debutant in India who is in the list of Olympic medal winners for India

He’s a grappler and, during the finals match, lost 7-4 against Zavur Uguev, who has been a world champion twice.

Dahiya is the second wrestler to have won a silver medal at Olympic wrestling after Sushil Kumar. According to a few reports, Dahiya even endured a bite from his opponent Nurislam Sanayev in the semi-final match.

Ravi Kumar Dahiya has endured significant challenges to be where he is today and has been highly successful.

After the gold in the 1980 Moscow games, the Indian Men’s Hockey Team won a single medal. This year, that fact changed when the team won bronze at the Tokyo Olympics.

They won this Olympic medal for India by defeating Germany 5-4 and secured the 5th medal won by India in the Olympics.

This win counted as historic for the Men’s Hockey Team after not having a single medal for 41 years in a row. It is a joyous moment without doubt, and we congratulate them on their victory.

This was possible after he defeated opponent Daulet Niyazbekov from Kazakhstan by pinning him.

What truly makes this special is the fact that this was his debut appearance in the Olympics. We are sure he will achieve much more Olympic medals for India in upcoming years.

Neeraj Chopra is India’s first and only athlete to win a medal in Olympic athletics/track and field. He was born to Satish Kumar and Saroj Devi, Haryanvi people, on 24 December 1997, in Khandra village, Panipat district, Haryana

Upon his arrival, Chopra was placed in Group A and qualified for finals with a throw of 86.65 meters. As he was competing with highly qualified and experienced athletes, his strategy for the finals was to “rely on his speed and put pressure on the rest of the field with a powerful long-throw.”

Chopra respectfully dedicated his win to sprinters Milkha Singh and P. T. Usha. His herculean achievement is worthy of endless praise, and we wholeheartedly congratulate him.

This year’s Olympics have seen India’s highest-ever total medal record in a single Olympic. We salute these 7 Olympic Medal Winners for India who have made all of us proud!