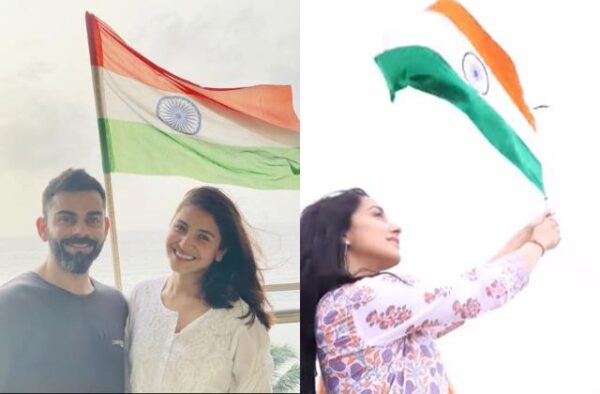 Anushka Sharma and Virat Kohli took part in PM Narendra Modi’s Har Ghar Tiranga event to commemorate India’s 75th anniversary of independence. Today on Monday, the diva posted a photo of herself and Virat with the Indian flag flying over their home. In the photo, Anushka is wearing a white kurta and smiling close to Virat.

Virat and Anushka stated, “Celebrating 75 years of our independence.” Wishing all Indians worldwide a very #HappyIndependenceDay! “HarGharTiranga Jai Hind”. Anushka chose a chikankari embroidered kurta for the momentous event, while Kohli went for a more casual appearance in a black T-shirt. Kohli, too, wished everyone a happy Independence Day. Kohli tweeted on Instagram Story and Twitter “75 glorious years. Proud to be an Indian. Happy Independence Day to all Jai Hind.”

Modi’s ‘Har Ghar Tiranga’ initiative was also supported by Virat Kohli, who changed his social network Profile photo to include a Tiranga image.

According to the Union Ministry of Culture, the goal of the ‘Har Ghar Tiranga’ initiative is to make the connection with the national flag more emotional rather than just official or bureaucratic. This year’s Independence Day is totally special in a variety of ways, thanks to the Azadi Ka Amrit Mahotsav.

Similarly, actor Akshay Kumar and Maharashtra Deputy Chief Minister Devendra Fadnavis actively participated in a motorcycle rally to commemorate the country’s 75th anniversary. Kumar and Phadnavis led the 10 km race event and automobile and motorcycle rally from Marine Drive in Bombay. According to ANI, 3,500 police officers took engaged in the parade of 100 four-wheelers and 60 motorcycles.

Mumbai | A 10 km race of 3.5k police personnel & rally of 100 four-wheelers and 60 bikes held from Marine Drive today to mark 75 years of Independence

Shah Rukh Khan and his spouse Gauri Khan went to Instagram to share photos and videos of their pre-Independence Day festivities. SRK, Gauri, and their children Aryan and AbRam are seen posing next to the Indian flag in the picture. Shah Rukh stated in the caption “It would take a few more sittings to teach the young people at home the importance and sacrifice of our freedom fighters for our motherland India.” “But having the flag flown by the small one let us all feel the pride, love, and happiness instantly,”

Aamir Khan, Kartik Aaryan, Alia Bhatt, and R Madhavan also showed their support for the initiative by flying the tricolor from their homes. Anil Kapoor decked out his home with tricolored lights and hung a flag outside.

Read More: 74th Independence Day: Significance, History, and Things You Should Know About

Bollywood actresses are known for their slender and beautiful figures. The B-Town divas are always in the top-shape...
Entertainment

Bollywood actresses are known for their slender and beautiful figures. The B-Town divas are always in the top-shape...
Entertainment

Nora Fatehi is a starlet and a performer. She was brought into the world in Quebec, Canada on...