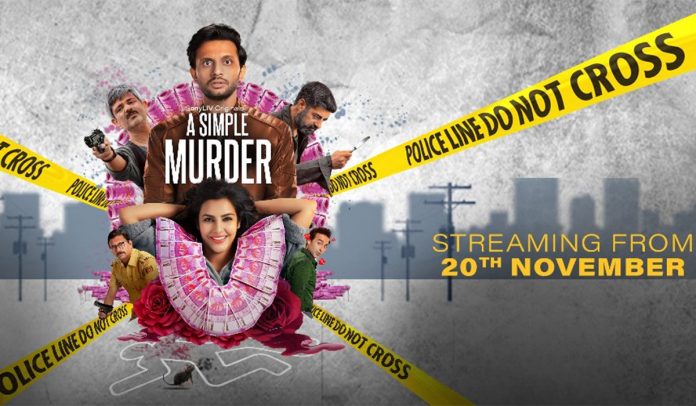 After a great success of SCAM 1992, now SonyLIV has bagged with another crime, thrilling and suspense story which has been set on dark comedy. The Director – Sachin Pathak, never misses a chance to leave his audience in the labyrinth of staggering suspense. After a long time, he came with a dark comedy genre – “A Simple Murder” (name may sound obvious but the story isn’t).

‘ A Simple Murder’  story looping around pink currency notes which started with a compulsion and later lead to a series of killings. Many twists and turns along with unpredictable deceiving moments of the characters can be seen in this full-marathon of the 7-episode series.

Manish (Mohd Zeeshan Ayyub), a middle-class man whose house is mortgaged, a failure who cannot find funding’s for his start-up and cannot satisfy his money-driven wife Richa (Priya Anand) who is upset with him all the time, took a wrong decision of his life coincidentally which later on became an incident and lead to the beginning of a number of chaos and life-changing events for all the characters in the story.

The story took an exciting turn when Manish enters the lair of Pandit (Yashpal Sharma) who runs a small crime business. Confusing Manish with the real assassin, Pandit hands him a hitman’s job to assassinate a politician’s daughter who has eloped with her Muslim boyfriend. Being an amateur in this profession, Manish kills someone else instead of his given target, then flees the scene with money, which caused a lot of chaos in order to step out of this crime scene and this further introduces Himmat (Sushant Singh) – the real assassin and Santosh (Amit Sial) – a man whose wife has been killed mistakenly by Manish. Gopal Datt plays a Delhi police inspector who is lazy and somewhere seemed to be not-so-interested in the chase, while Vikram Kocchar is his deputy who chafes at his superior’s inefficient ways.

Now, what will happen when Santosh (Amit Sial) will hunt Manish and try to avenge his girlfriend’s death? There are going to be a lot of plot twists to entertain you till the very last moment. The opening credits and characters seem to be much lively and active, and the music is well-composed, matching the pace and situations. In the end, it all sums up to our viewing pleasure that murders may never be simple, but crime sometimes does pay.

Those were the times when NETFLIX was the only streaming service provider to offer a wide variety of award-winning TV shows and movies. But now, other content production companies like SonyLIV has also started stepping into the race by producing shows like ‘A Simple Murder’ (shoulder-to-shoulder) with NETFLIX and with a prominent promise to deliver magnificent jaw-dropping and mind-blowing content for their audiences.

Previous article
Bicchhoo Ka Khel Review: Is Munna Bhaiya back from the grave after Mirzapur?
Next article
Best Rom Coms to Watch on NETFLIX During this Winter Season
Flickonclick

Noise has launched the Noise ColorFit Nav on the Amazon Prime Day Sale. While the company kept the...
Entertainment

In today's Era audience has now shifted to online web series, OTT platforms such as Netflix, Amazon Prime, and...
News

The girl on the train revolves around Mira Kapoor, who was a successful lawyer and a family woman,...