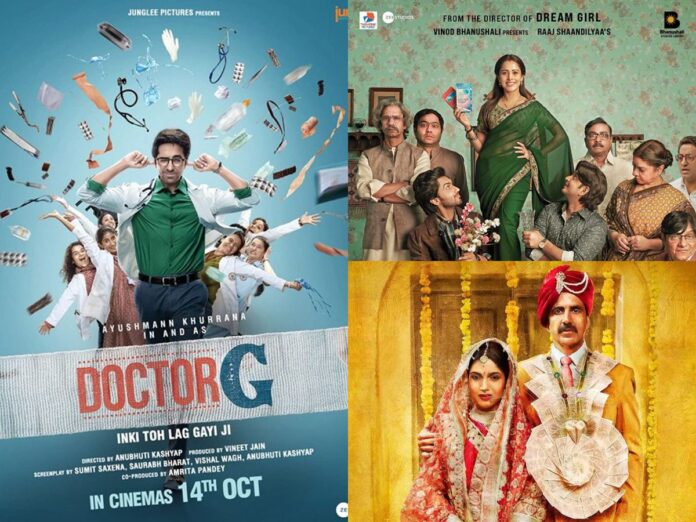 Doctor G an unconventional medical Indian comedy movie starring Ayushmann Khurrana, Rakul Preet Singh and Shefali Shah was recently released in the theatres. The fans are loving the movie for its unique and quirky concept that greatly handles the comedy and emotional touches. If you have watched the film already then you must be searching for similar movies to Doctor G that you can watch online. Here we have made the job easy for you by curating a list.

Ayushmann Khurrana also stars in this film as well. The movie is based on a person who becomes a sperm donor. It has a touch of unconventionally just like Doctor G and deserves to be watched by every Bollywood film lover. The film also features Yami Gautam and Annu Kapoor in lead roles. You can stream it on Amazon Prime Video.

This Nushrratt Bharuccha starrer is a recently released social comedy that tackles the taboo in a society like Doctor G. The movie follows a woman who takes up the job of condom salesperson despite her family’s objections. It is available to stream on ZEE5.

Sanjay Dutt and Arshad Warsi gave a mind-blowing performance in this film that is still considered a pioneer in the Bollywood comedy genre. It follows a thug who convinces his parents that he is a doctor in the city. However, things drastically change when his parents realize the truth. It’s one of the best movies like Doctor G to watch on Netflix.

It never hurts to watch a good movie twice. I say this cause most of us have already watched this brilliant comedy movie that stars Aamir Khan, Sharman Joshi, R Madhavan, Kareena Kapoor and Boman Irani in the lead. It follows a few medical college students who rediscover their lives and goals. The movie has a similar setting to Doctor G. It’s streaming on Netflix.

Akshay Kumar and Bhumi Pednekar star in this quirky Bollywood comedy. It follows a newly married couple in which the wife complains about the absence of a toilet in her husband’s home and leaves him for the same until he decides to do something about the situation. You can watch it on Netflix and ZEE5.

Another quirky social comedy that is one of the best movies like Doctor G to stream online, Badhaai Ho follows an adult man who becomes embarrassed when his mother gets pregnant. This puts his relationship in jeopardy. Ayushmann Khurrana and Sanya Malhotra feature in this movie.

A father trying to reconnect with his son forms a fake online persona of a woman on social media. This hilarious comedy film is quite similar to Doctor G when it comes to bringing out a not-much-talked-about issue in Indian society. It is streaming on Netflix.

Amazon Prime Video is updating its database by a ton and you will have to choose from among...
Entertainment

Disney+ Hostar launched a number of new shows and movies in April 2022, including Moonlight, Death on the...
Entertainment

After years of watching western creations like 'A beautiful mind' and 'Imitation game,' we have had a longing...
Entertainment

Sony Liv has been giving us too many things to watch at one time. Whether it is the...