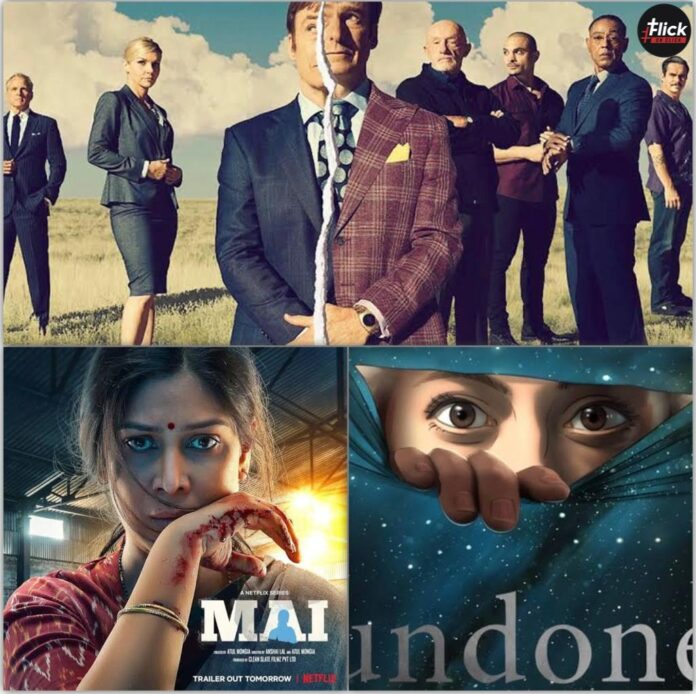 Want to conquer the summer vibe this April by binge-watching some good drama? The various OTT platforms, on the other hand, are all prepared to make your April worthwhile with some fascinating new web series in the works. The anticipation and intrigue about what will happen in the following episode is excruciating for moviegoers.

All of the programs of the shows are released at the same time thanks to Ott services. The Indian public has enjoyed various new web series such as The Fame Game and Rudra: The Edge of Darkness, and they are now anticipating forthcoming releases.

To help you organize your binge-watching experience in April 2022. we’ve compiled a list of 6 new web series that you can stream this month.

A middle-class spouse, mom, and volunteer nurse sees a trauma firsthand that forever alters her life. She is dragged into a rat hole of violence, criminality, and power in a heartbeat. Mai is a crime drama about a mother who seeks vengeance for the loss of her daughter. The web series, starring Sakshi Tanwar, Raima Sen, and Seema Bhargava in the lead role will premiere on Netflix today on April 15, 2022.

Breaking Bad’s Walter White finally discovers Saul Goodman in that Albuquerque, New Mexico, shopping center. Hence, the web series strips him apart to his nuts and bolts, starting as Jimmy McGill. Saul/Jimmy and his uncomfortable alliance with Jonathan Banks’ Mike Ehrmantraut, portrayed superbly by Bob Odenkirk in what could be his professional life (surely career-changing) performance, make for a must-watch new web series for any fan of prestige TV, Breaking Bad aficionado or not. Season 6, the final season of Better Call Saul, releases on April 18th.

Lyonne portrays Nadia Vulvokov, a game designer who expires and restores the same night in a continuing flashback sequence and seeks to solve it, which leads her to meet Alan Zaveri (Charlie Barnett) in the same position. The next episode takes place 4 years after Nadia and Alan left mortality’s timeline changes together. Amy Poehler and Leslye Headland’s Award-winning show will continue to examine existential themes via an often hilarious and sci-fi perspective.

Abhay Season 3 got broadcast on Zee5 on April 8, 2022. The ‘Abhay’ web series continues in this year. According to the producers, another season of criminal thrillers is in the pipeline. The new season consists of eight episodes. It was directed by Ken Ghosh and produced by BP Singh. Kunal Khemu, Asha Negi, Rahul Dev, and Tanuj Virwani all have significant roles in the drama.

Undone follows Alma, a lady who survives a near-fatal automobile accident and realises she has a bizarre, reality-bending connection with time, from the brains of BoJack Horseman partners, director Raphael Bob-Waksberg and producer Kate Purdy. She makes use of her newfound skill to uncover more about her father’s demise. Undone is the type of consciousness series that truly pushes the boundaries of what the animation industry is capable of. Season 2 will air on Amazon Prime on April 29.

This series, which aired on SonyLIV on April 7, 2022, is set in North India and follows the Mishra household. Moreover, the following season will continue to delve into the Mishra clan’s far from flawless realities and relationships, as well as the elegance of small-town, middle-class Indian families.

Previous article
Most Expensive Things That Alia Bhatt And Ranbir Kapoor Own
Next article
KGF Chapter 2 OTT Release date: Everything You Need to Know
Flickonclick Team

'Watch party' feature Launched In Amazon Prime India as the year 2020 has brought a lot of unexpected...