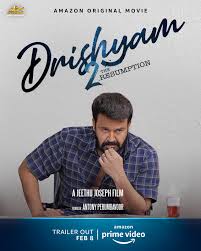 Drishyam 2 has been released and it’s rocking the OTT space with a bang. Yes! The sequel of the much popular ‘Drishyam’ is here to make your tummy ache with excitement and thrill.

Live on Amazon Prime Video, the story of GeorgeKutthy and his family is something of a worthwhile watch, according to the latest reviews and critical opinions. Drishyam 2 is getting all praise from both ends of the society, the audience, and from the showbiz world as well.

Moving on, the story in the sequel is continued from where it was left off. The family who once successfully hid the murder committed by them are now in limelight and are reeled in for the crime. The goal is to again evade the crime and make sure they come out clean but it’s not that seemingly easy.


The one thing that has been changed from the previous timeline is that Georgekutthy is a much wealthier man in Drishyam 2. He has his own luxuries and an additional plan for producing a movie as well.

Directed by Jeethu Joseph and having an array of good actors such as Mohanlal alongside Meena, Ansiba Hassan, Esther Anil, Asha Sarath, and Siddique, the movie makes a great impact on their targeted audience.

In an interview, it was revealed that the cast and the directors had the plan for a sequel for a very long time but were sitting on the idea. Also, when the shooting started, they knew that it was going to be running good numbers due to the scripts, storyline, and 20 other factors which were backing the cause.


So, if you haven’t planned on watching anything this weekend then this is something that can garner your weekend watchlist. Being claimes as one of the most thrilling movies in Malayalam cinema spectrum, it is surely going to meet up with your expectations.

Tollywood has garnered loads of positive reactions and reviews from audiences and critics alike in the last few...
News

6 Reasons why you should definitely watch Dr Strange 2

Dr Strange 2 was recently released in the theatres, and the fans are going crazy about the multiverse...
Entertainment