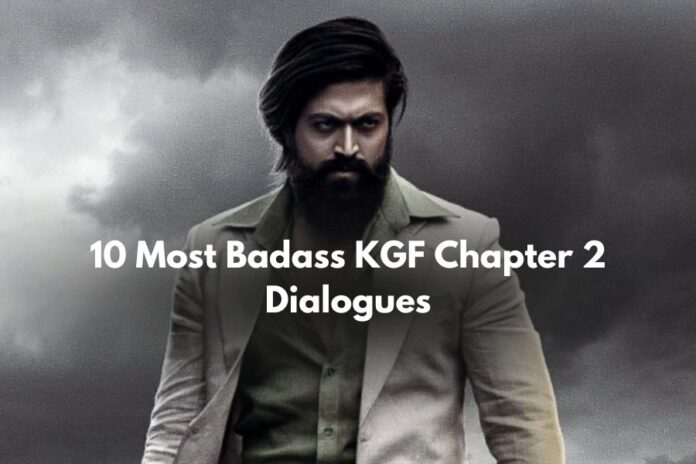 KGF Chapter 2 was packed with badass dialogues, making people cheer for their favourite Rocky in the theatres. The movie is a sequel to the Kannada film KGF which was a huge success at the box office. KGF is the story form for Kolar Gold Fields, in which the story of the movie is set. There are many hard-hitting scenes in KGF Chapter 2 with power-packed dialogues that make the viewers whistle with full power in the theatres. KGF Chapter 3 is also in the works, and we expect the movie to release in 2024. Salaar, a movie which stars Prabhas, is a spin-off of KGF, which will release in 2023. We expect that movie to pack some glorious dialogue as well. KGF Chapter 2 is directed by Prashanth Neel and produced by Hombale Films. The movie was released on 14th April 2022.

Here are the ten most fierce KGF Chapter 2 dialogues!

Please let us know which KGF 2 dialogues are your favourite. We personally love the last dialogue as it is very heart-touching and somehow badass at the same time. KGF Chapter 2 is a wonderful movie which you should definitely watch right now to listen to some of the greatest dialogues in the history of Indian cinema.

Yash's KGF: Chapter 2 is doing really well in India and around the worldwide. After being delayed several...
Entertainment

KGF 3 Shoot to Start after Salaar, Marvel like Universe in the Works

KGF 3, a highly speculated sequel for the KGF Chapter 2, has finally been officially confirmed by the...
Entertainment

Another all-time hit in the works and performance is KGF Chapter 2 featuring Yash. After 2 years of the...