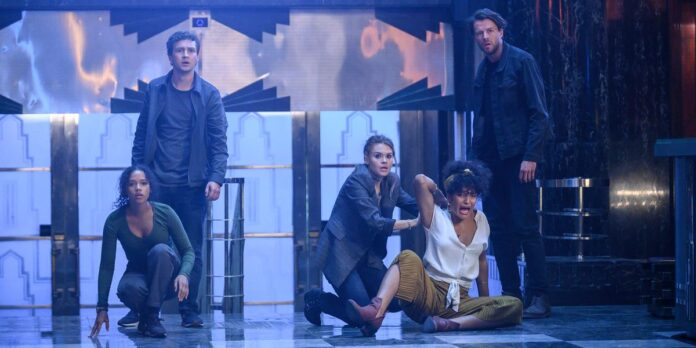 This second part in the Escape Room series is one of the best Tamil dubbed Hollywood movies filled with thrill, suspense and excitement on Netflix. Some people are trapped in a deadly game that they must clear to survive.

A teenage girl develops an uncanny ability for healing and attributes it to the divine Virgin Mary. However, pretty soon, it is revealed that the source behind that power is not the divine Virgin Mary but a sinister evil force. It’s one of the best horror Tamil dubbed Hollywood movies on Netflix.

An FBI profiler pursuing a high-profile thief becomes a reluctant partner when a crook is always one step ahead of both of them and sends them to prison. The trio of Ryan Reynolds, Dwayne Johnson and Gal Gadot star in this Tamil dubbed Hollywood movie.

4- The School for Good and Evil

Two best friends have been whisked away to a magical school to form the future fairy-tale story. They find their bond of friendship tested in the school. This is a newly released Hollywood movie on Netflix.

5- Venom: Let There Be Carnage

Eddie Brock and Venom are trying to navigate their relationship when suddenly, a new threat arrives, and they are forced to work together to stop the evil force. Will they reconcile with each other? You should watch it now as it is one of the best Tamil dubbed Hollywood movies in the action genre on Netflix.

A couple adopts a child who fell from a spacecraft. When the child grows a bit older, he starts to become evil and gains superpowers. This puts the parents in a jeopardised situation where they do not know what they should do.

This Marvel superhero movie is a breath of fresh air. Peter Parker, on a school trip to Europe, encounters a new threat while trying to navigate his relationship with the girl he likes. It’s one of the best superhero Tamil dubbed Hollywood movies to watch on Netflix.

This Tamil dubbed Hollywood movie is not for the faint-hearted. The film follows influencers who arrive in a Texas town and try to breathe life into the town. However, they encounter an infamous killer who wears a mask made from human skin.

It is a romantic Hollywood movie dubbed in Tamil on Netflix. A female New York hairdresser gets an opportunity to work at a prince’s wedding. However, she ends up falling in love with the prince.

Last but not least on the list of best Tamil dubbed Hollywood movies is Home Team, a story of a suspended NFL coach who guides his son’s team in a school tournament. It is based on a true story.

It's time already to get your popcorns ready for the final season of Money Heist. Yes! The second...
Talent

Deepika Padukone is one of the top actresses in Bollywood, and she is probably the most sought-after Indian...
Entertainment

Malayalam movies are now remade in Hindi by Bollyoowd due to their engaging and enthralling storylines. The best...
Entertainment

Nothing keeps a series intriguing, thrilling, and oh so romantic, like a little touch of love. Take a...