Why The Kashmir Files is being given so much limelight? The much-anticipated Hindi blockbuster The Kashmir Files aired in India on March 4, 2022. A small number of people watched it in Wave Mall’s multiplex room in Jammu’s Narwal Bye Route.

On this occasion, politicians, social activists, psychologists, authors, intellectuals, significant current and retired civil and police officials from Jammu and Kashmir, as well as the film’s creators and stars, assembled in Jammu. Certain members of the local press were also there at the ceremony.  The Kashmir File is released in theatres/cinemas worldwide.

The Kashmir Files differs from the typical Bollywood film format in that it is centred on a storey, primarily a love storey. In reality, the film is not based on a traditional narrative. Its storey is based on clip interviews with first-generation Kashmiri Pandit survivors conducted in 1990.

This gives authenticity to the film’s theme and pace. Considering Kashmir and Kashmiri Pandits are such difficult topics for anyone anywhere in the world. Whereas, there may be some holes in the picture when it comes to research and development.

The main focus of The Kashmir Files is on 4 major dimensions:

To solve for these weaknesses, the filmmaker wisely avoided key areas that could have created unneeded criticism and conflict. 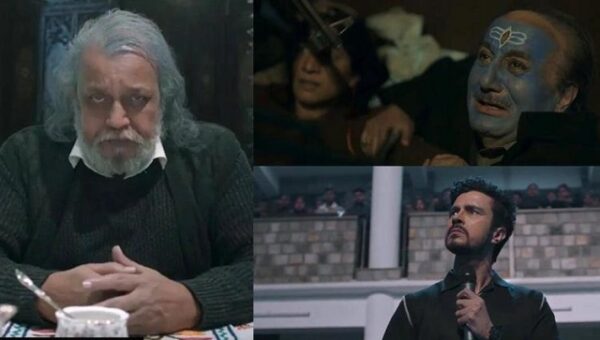 Krishna (Darshan Kumar) is a Delhi university student. Krishna is persuaded—’brainwashed,’ to use a euphemism by a lecturer (Pallavi Joshi) to run for office on the ‘Kashmir issue,’ oblivious to his own household ‘s history. His parents and older brother were slaughtered during the exodu “genocide,” the movie continuously corrects us.

When Krishna returns to his family home, purportedly to place his grandfather’s remains but also to capture the region’s current situation. Moreover, he is confronted with inconvenient facts, all wrapped up in memories and revealed at a suitable time.

Significantly, Vivek depicts Kashmiri Hindus and Muslims as enemies from the outset. We see murders, desecrations, and heinous acts of looting and cruelty. The picture reveals its own bloodlust by invoking it. The aggression isn’t contextualised; it’s only supposed to be graphically provocative.

True, Kashmiri minorities have traditionally been persecuted, sometimes in more horrifying ways than depicted onscreen. The video, however, does not stop at naming extremist insurgents and fundamentalists as the culprits. Every Muslim, from a maulvi at a refugee school to the relatives of the Pandits, is a criminal or a facilitator. Steven Spielberg chose a scrupulous German citizen as his hero in Schindler’s List (1992), yet there isn’t a solitary centrist in The Kashmir Files.

The Kashmir Files is based on a warped logic.

Here’s a typical conversation. Character A: Kashmiri Muslims face discrimination. Character B: However, they also murdered Pandits. A: That is not correct. B: That’s correct. Article 370 should be removed.

The concept that no conflict is one-dimensional, that numerous persecuted groups can coexist in a location, simply does not occur to this film. Rather, it confuses everything: sloganeering and activity with terrorists, student unions with national politics, and twentieth and twenty-first century Kashmir with historical Kashmir.

At the very minimum, The Tashkent Files featured an interesting cast of people. Anupam Kher and Mithun Chakraborty head the old guard here. Darshan Kumaar appears to be any Indian boy who is trapped in a family Group chat and is unable to escape.

Pallavi Joshi is the least plausible as a shady professor, expressing even the most mundane things with a nefarious undertone. The film is most exciting when it is pointing its gun at academics and journalists, not when it is presenting meaningful answers to the Kashmiri Pandit situation.  Additionally, In a film packed with pictures of women and children. Hence, we are taught that “the international media exploits images of women and youth.”