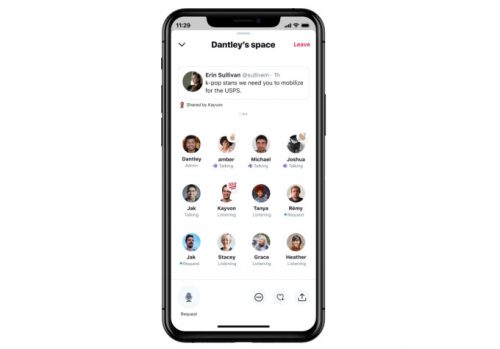 Twitter is planning to launch its new Spaces feature for Android users soon. In this new Spaces feature, users will be allowed to communicate with each other with a voice-based communication service on Twitter that will be surpassing Clubhouse, typically by imitation. The Clubhouse is a new voice-based social networking platform that has gone viral and managed to bring a lot of traffic over the past few months.

Twitter describes Spaces as a platform of interaction for the Twitter community in the form of voices of the people. In other words, it will allow a user to interact with a single person or a group of people for live conversations.

Twitter also revealed that it will keep a copy of Spaces for 30 days for review purposes in order to check whether any violation is being caused or not. Hosts are allowed to keep a copy of their Space data by downloading it as long as it will be kept with Twitter, that is, within 30 days. Users can also download a copy of a transcription that will contain all the words which were said by speakers.

Spaces were first announced in December 2020 and were first rolled out for iOS users. And now, Android users will also enjoy this new beta feature along with iOS users. This means that not every user will be able to start a conversation on Spaces as this is going to be a beta version.


Twitter is now focusing more on monitoring and assessing this beta version and looking out on the modernization aspect. The company’s main objective is to first gather feedback from beta users so that it can terminate most of the bugs before rolling it out as a platform for the Twitter community.

By observing and looking over online harassment that women and other marginalized communities face every day, the company first rolled out this new feature for them because this way it will learn about what it needs to do to reduce online abuse or harassment and moderation points of view.

The only competitor for Twitter Spaces is Clubhouse that has currently over 10 million users available only on iOS. Android being the world’s largest mobile operating system can easily rule out Clubhouse as it has a bigger community compared with iOS uses.

Phone Bhoot Twitter Review: Netizens are calling Phone Bhoot a laughter riot on Twitter. They are terming the...
News

Google Pay users in India and Singapore can now receive money from GPay users of the United Nations....
Technology

Google Pixel 6 will be available on October 19, according to a tweet post from Google. The Android...
Technology

The year 2021 was a fruitful year for the car community as it gave rise to a bunch...
Technology

Motorola Moto E32s with a starting price of ₹9,299 has been launched in India through the e-commerce platform...
Technology

Motorola Company started its new year by launching a new smartphone under the Motorola One series in the...