Check out the massive fees of Thunivu cast members. 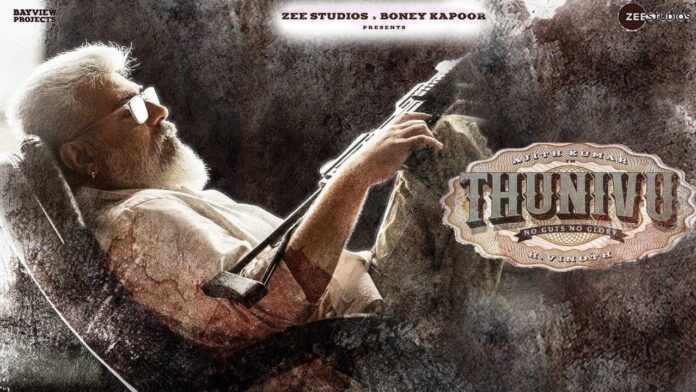 Thunivu is an upcoming Tamil language action heist film which will release in the theatres on 12th January 2023. The movie will star Thala Ajith in the lead role. Thunivu is going to clash at the box office with Thalapathy Vijay’s Varisu. Here we have covered the fees of cast members of Thunivu.

Thala Ajith reportedly charges Rs 40-50 Crore per movie fee, but for Thunivu movie, he is charging Rs 60 Crore as his salary. He will play the main lead in the film, and you can expect the film’s story to revolve around him. Thunivu is being produced by Bayview Projects LLP and Zee Studios. Red Giant Movies has acquired the rights to distribute the film.

Manju Warrier, who is going to play the female lead Kanmani in Thunivu, is being paid Rs 1 Crore as her salary for the film. Samuthirakani, the actor who is playing the role of DGP in Thunivu, is getting paid a hefty amount of Rs 2 Crore as his fee. Thunivu is made at a massive budget of Rs 140 Crore, and the salary of cast members has consumed half of this budget.

Thunivu is not going to release in Hindi as it is not a pan-Indian film. Fans will have to wait for quite a few days before the dubbed version of this movie comes out on an OTT platform.

Recently it was revealed that Akshay Kumar charged a massive sum of Rs 120 Crores for his digitally...
Entertainment

10 Highest Paid Tamil Actors and Their Per Movie Charges

The Tamil film industry is one of the largest in India and has produced some of the most...
Entertainment

Thunivu box office collection day 1 is estimated to be around Rs 13 Crores. The movie is earning...
Entertainment

Zwigato is an upcoming Hindi movie featuring the comedian Kapil Sharma in the lead. The film's name is...
Entertainment

Varisu has taken a substantial lead of about Rs 25 Crores in box office collection over Thunivu. Both...