Samsung is on a roll and this time it’s getting quite good feedback with its new lineup of M and A series devices from the market. With that in mind, a new device in this same category is here, the Samsung Galaxy M51. 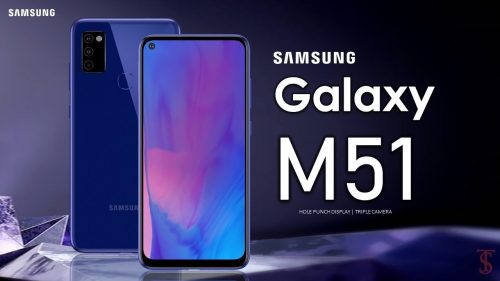 Now, just like all the other Samsung devices, it has gained in some of the early adopter fans as well. And why won’t it do so, for it has some seriously amazing specifications?

Now, one of the biggest leaks that we’ve encountered is about the battery capacity of the device. And we have revealed it down below and if it’s true then you’re going to be blown by what the capacity this device can carry. So, let’s move onto that and check what’s under the hood of Samsung Galaxy M51

it is rumored to be having a 6.67-inch full-HD+ AMOLED, which is something that can easily accommodate any of your tasks. Be it working on multiple things at once or playing games such as PUBG with a clear view, it does all.

The screen refresh rate has not been out yet but it won’t matter much anyway for its not expected to anywhere near 120 Hz making it just another normal display.

But it doesn’t mean that you should value it any less, it’s coming from Samsung AMOLED lineup and is one of the best panels in terms of colors and all other features.

The onboard processor is expected to be octa-core Qualcomm Snapdragon 730 SoC with at least 8 GB of RAM. It would be good enough to run your hardest task without lag and would be able to churn out good performance under heavy workload pressure.

It would be featuring a triple camera setup as seen on most Samsung devices or for a matter on most of the smartphone devices. The camera set up with a 64-megapixel primary sensor and a 12-megapixel secondary sensor with an ultra-wide-angle lens.

One of the major influencing factors which can make your turn toward the direction of this device is the massive battery capacity that it carries. Now, it is said to carry a battery capacity of freaking 7000 mAh which is huge compared to any device to date.

Imagine having the battery capacity of two devices into one, and that you can expect from the new Samsung M51.

Some other features for the device are that it comes with a 25W fast charging and we guess that you’ll be needing the charger quite less often but still having fast charging for such a massive battery helps.

Samsung Galaxy M51 would be carrying a price range of 25,000 INR to 30,000 INR and is expected to hit the mid-budget sector hard. It was supposed to be launched back in July but due to the pandemic, it has been pushed further beyond and would be launched sometime in the second week of September.

Asus is back with another one its iconic Zenfone device. Yes! They have launched not one but two...
News

Redmi Note 10T 5G is here from the house of Xiaomi and you should be excited if you...
Entertainment

As Christopher Nolan's films leave the viewers scratching their heads, from starting to its end, India's beloved actor...
Technology

Jamtara Season 2 Review Outline: The new season of the show refuses to settle in the pre-defined mould...
News

It’s time for tech enthusiasts to rejoice as Motorola announces over the weekend that a new smartphone will...
Technology