Samsung is coming up with another one of its mid-ranger beasts and with that, they also started a new lineup of a device called F series or Full-On Series by Samsung. The new device is branded as the Galaxy F41 and would be launched on 8th October at 5:30 PM.

Before the actual launch, we have the details of how the device will look and feel like and what you would get under the hood of this new F series device. 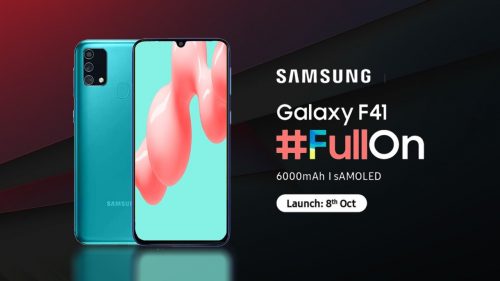 The device packs in some heavy and up to date specs for a mid-range device, which can impress the users in this segment.

The device comes with an Exynos 9611 SoC and at least 6GB of RAM on top of which, one can easily expect a standard 64 or 128 GB of storage capacity.

One can also see the expansion slot, so no need to worry about running out of storage as well. Other features that make it more efficient and on par with the other devices in the same price range are  4G, Wi-Fi, Bluetooth, GPS, and a Type-C port.

The display is a Full HD+ sAMOLED Infinity-U which is 6.4 inches in size and can perform quite well under the given price range. The screen is having a waterdrop notch and the pixel ratio for the screen is 2340×1080 P.

The camera’s on the back panel are a mystery as of yet but it’s expected that this device will rock a similar setup as of Galaxy M31. All we know as of now is that it is a triple camera setup only. Apart from that, the front shooter is a 32 MP sensor.

The camera on this kind of device makes it stand out of the competition as its one of the primary needs of the user to have a good camera device. So, Samsung would supposedly do a good job as they’ve proved with their earlier devices.

The battery capacity of Samsung Galaxy F41 will be 6000 mAh and can carry on with a full day of workload. It is also coupled with a 15 W charger that is capable of making the device full in relatively less time.

Literally, people have forgotten about battery backups since this new trend of giving bulk battery capacity came out and it is not a thing of concern for anyone anymore.


Also Read- Google Pixel 4a to Be Launched on 17th October

It will be available for the booking from Samsung’s website and Flipkart as well after the launch. The price of the device is expected to be anywhere between 15,000 to 20,000 INR.