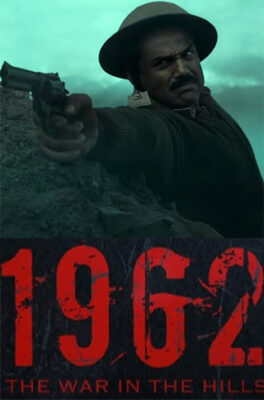 It takes a lot of effort to make a movie or a web series based on historical events as it demands deep research on facts and authenticity. The filming crew including directors, producers, casting team, scriptwriter, and actors has to be equally cautious when making a historical movie because anything cannot be shown differently from the past events and it should be exact.


And this is what happened, Mahesh Majrekar failed to deliver the best out of 1962: The War on the Hills as it lacks in every department – direction, writing, and performances. This war drama stars Abhay Deol, Mahie Gill, Sumeet Vyas, Anup Soni, and other great actors.

It is a story of the Indian soldiers who fought a one-sided war against China in 1962 with no proper gears and equipment in the Ladakh winter. The story majorly focuses on Major Suraj Singh (Abhay Deol) who has been appointed to lead his troupe in Ladakh to put up a fight against Chinese soldiers. His troupe mainly consists of those who have come from a town in Haryana, Rewari. This is what jarred the audience that none of them talk like someone who belongs to Haryana.

As the name suggests, the show must be based on true events, but nothing resembles line one. Not a single actor resembles their characters at all, it only seems that actors are just delivering their dialogues.


The crew including actors said in an interview that the series has been shot in tough terrains of Ladakh but when anyone can easily tell after watching that all of this is fake, and on top of that the VFX are of poor quality that you wouldn’t like to continue watching and finish it until you are only interested in knowing the story and do not care about the visuals.

Many binge-watchers will definitely watch and praise the series because it is all about the Indian army and how bravely they fought against the Chinese soldiers as they are still fired up after the Galwan Valley clashes. But we cannot overlook the mistakes that the makers didn’t pay attention to include post-traumatic stress disorder (PTSD) just like we saw in URI: The Surgical Strike.


If this show has to be summarized in one word then disappointment will better suit it, especially after comparing it with the level of drama we have seen in earlier war series. The story seemed to be drifting and tossing from one thing to another rather than focusing on a single thing. But we still expect great shows from the director in the future and hope that our jaws will definitely drop next time.

Previous articleSanjay Leela Bhansali’s Top Classic Which Everyone Should Watch
Next articleThe Girl on The Train Review: Should You Be Watching TGOTT
Flickonclick

Holidays can be exhausting and boring. If you’re thinking to go on a Binge-watching spree in your favorite...
News

The Galaxy M31 is the latest smartphone in Samsung's lineup of affordable online-exclusive devices designed specifically launched for...
Entertainment

No matter what sector of the film industry it belongs to, comedies are a vital and crucial component....
News

The suicidal death of Sushant Singh Rajput has brought up the nepotism in Bollywood on everybody's mind back...
Entertainment

Ajeeb Daastaans Movie Review- Netflix has long entered into the Indian Cinematic zone and has proved it's mantle...
Entertainment

Kapil Sharma, one of the most popular entertainers on television, has made his Netflix web premiere with I...