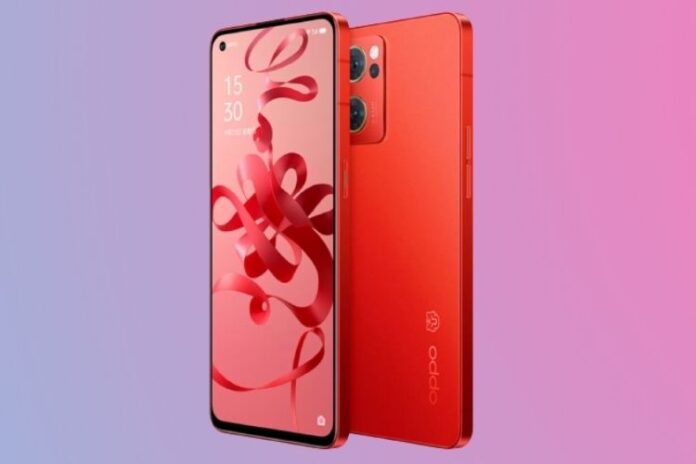 Oppo has unveiled/ revealed the Reno 7 5G handset’s New Year Edition. This new model is red and features a distinctive sign on the back. The Oppo Reno 7 New Year Edition has been released in China. Even though, the firm has made no announcements on the phone’s release in other countries as of yet.

The two Oppo smartphone variants , as well as the firm’s next-generation TWS earbuds and the Oppo Watch Free, are expected to be released/revealed in India in January 2022. According to the source, Oppo’s new TWS earbuds would be priced similarly to the Oppo Enco X – approximately Rs. 9,990. Oppo Reno 7 5G New Year Edition is simply a redesigned variant of the previously released Reno 7 5G phone. Moreover, It has a 6.43-inch Super HD+ AMOLED screen has a HD Screen resolution of 1,080 x 2,400 pixels. Along with a refreshing rate of 90 Hz, and an area ratio of 20:9.

This device is powered and accelerated by a latest Qualcomm Snapdragon 778G processor. Additionally which is combined and featured with up to 12 Gigabytes of LPDDR4x RAM and up to 256 Gb of onboard storage.

The Oppo Reno 7 New Year Edition boasts a triple camera unit with a 64-megapixel main sensor, an 8 MP wide-angle lens, and a 2-megapixel closeup camera lens. For photos and video calls, the business has included a 32 MP Sony IMX709 camera sensor on the front mode.

Previous article
WhatsApp New features: Allow users to find hotels, Grocery, and Clothing stores within the app
Next article
Everything you need to know about Samsung Galaxy S21 FE, Before the official launch!
Flickonclick Team

Nokia has been in quite a limelight for its new mobile devices and other gadgets such as smart...
News

How to Get JioPhone Next Now from nearby stores

JioPhone Next, a collaboration between Jio and Google, will be released on Diwali. The smartphone will feature a...
Technology

Realme 30, the latest budget smartphone from the Indian manufacturer, was launched with a Unisoc T612 processor in...
Technology

The Redmi 8T has been launched in the European market and after the successful launch of its predecessor...
Technology

The winter season is upon us. Winter is the season of love and happiness where we greet our...
Technology