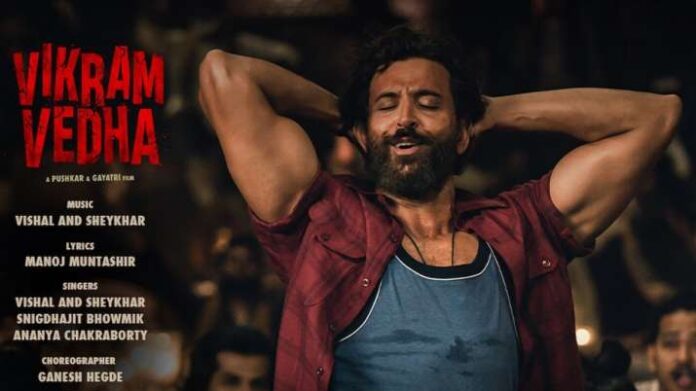 Both songs have received positive reviews from critics and general listeners. Positive word of mouth has been added to the Vikram Vedha ticket bookings. Bande and Alcoholia are fantastic songs that have surely levelled up the excitement for the upcoming action thriller.

Bande is termed the theme song of Vikram Vedha 2022 by its producers, and the video of the song shows Vikram (Saif Ali Khan) and Vedha (Hrithik Roshan) in a heated battle against each other.

The song is synonymous with the theme of the film itself. Bande is sung by Sivam, and the lyrics of the song are written by Manoj Muntashir. SAM CS, who is providing the music for Vikram Vedha 2022, has done a phenomenal job with this track.

Alcoholia is a dancing number from the Vikram Vedha 2022. The song was released by Hrithik Roshan during a promotional event in Mumbai. Hrithik danced to the tunes of this song with his fans to promote the film.

Those who missed Hrithik’s trademark dancing style are in for a treat, as the song has it all. The song is sung by Vishal And Shekhar, Snigdhajit Bhowmik, Ananya Chakraborty. It has also been composed by Vishal and Shekhar. The lyrics for this track are written by Manoj Muntashir.

Here you can listen to Alcoholia:

Who does not love old songs in Hindi from the musicians like Kishore Kumar, RD Burman, Lata Mangeshkar...
Entertainment

Surely, a list of melodies pops up in your mind when you hear the phrase underrated Bollywood songs,...
Offers

Latest Offers on Vikram Vedha Ticket Bookings, Here’s How to Get Massive Discounts