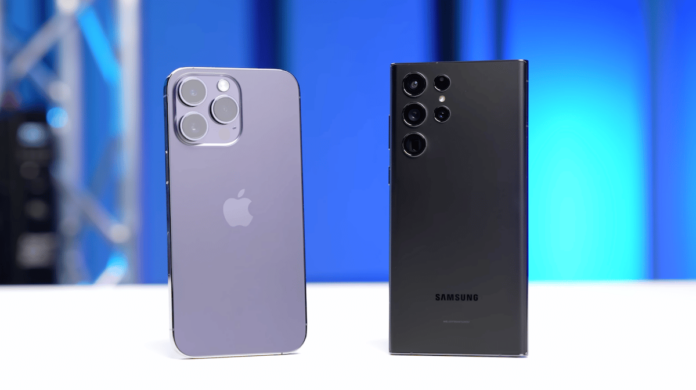 Scroll down to explore the best upcoming smartphones in 2023

The Samsung Galaxy S23 Ultra 5G is likely to cost Rs. 1,14,990 in India. The smartphone comes with a bevy of high features that are excellent for both individual and commercial use. You can expect a smartphone with superb visuals, unique camera features, a robust processing setup, and a superior battery layout. It is also a dust- and water-resistant handset with an optical fingerprint reader on the display.

You can trust this upcoming smartphone to offer stunning images, cutting-edge camera functions, powerful processing power, and a long-lasting battery. It will be offered in Phantom Black or Phantom Silver, with a resolution of 1440 x 3200. The Samsung Galaxy S23 Ultra 5G is among the finest upcoming smartphones in 2023.

Even though the iPhone 14 is still a new product, speculation about the forthcoming generation has already begun. Apple has indeed announced the switch from Lightning to USB-C, and other reports suggest that Apple will transition from physical buttons towards solid-state/haptic buttons. Apple might rename the iPhone 15 Pro Max as the ‘iPhone 15 Ultra.’ The iPhone 15 Pro variants are expected to include USB-C 3.2 and Thunderbolt 3 transfer capabilities.

The incorporation of USB-C 3.2 can greatly increase data transfer rates, even up to 20Gbps, and Thunderbolt 3 can provide an extra 40Gbps boost. It is also believed that perhaps the iPhone 15 Pro will have a Titanium body with a glass rear panel. it is likely to be launched in Sept/Oct 2023.

Considering that the Galaxy Z Fold 4 is the greatest folding phone Samsung has ever produced, it would be a disgrace to stop there. And they are unlikely to do so. That’s why we’re looking forward to hearing what the Z Fold 5 has in store. There aren’t many details shared as of now by the company. However, we’d want to see an even smaller design, rapid charging, and a constructed-in S-Pen for sketching and doodling on its large foldable display.

Galaxy Z Fold 5 is the upcoming smartphone that is an excellent blend of usefulness and style. The device is expected to be priced at around Rs 182,400 when it is released in India. This lightweight, sleek, and attractive device will be available in an array of color combinations.

The sleek, compact phone will be available in gold, silver, white, and black. The upcoming Huawei smartphone is believed to be powered by the Android 11 software. A 4,500mAh battery pack is also attainable, allowing you to operate the device for longer periods when playing games, enjoying music, or watching videos,

The Huawei P60 Pro is anticipated to cost around Rs. 54,490 in India. Users can expect perfect speed for multimedia, gaming, and day-to-day tasks. The device will be available in March 2023.

This will be among the top smartphones for 2023. This device will have appealing specifications and features. The Xiaomi 13 Pro, according to reports, sports a 5,000mAh battery pack and operates Android 12. The Xiaomi 13 is speculated to have three 50 MP cameras, which would be a big advance over the Xiaomi 12 & 12T.

its amazing battery pack allows you to operate the phone for long periods, whether you’re playing games, watching a movie, or enjoying music. The Xiaomi 13 Pro handset is available in black, green, blue, and pink colors. This will be one of the best upcoming smartphones for Android fans in 2023.

This is a little of a dark card, but undisclosed internal docs and code indicate that Google is building on a Pixel-branded foldable tablet. We expected it to launch in October 2022 alongside the Pixel 7, however, most informants now anticipate it will launch in early 2023.

There have been a few leaks regarding what kind of foldable gadget it will be or what features it will have, but so we still know that a large number will be interested in a Google-branded folding smartphone with Pixel cameras.

A quad-camera configuration packed within offers a flawless filming performance, supported by a reliable battery design and large storage capacity for people into vlogging and other activities. Samsung Galaxy A74 is the finest option with all the good functionalities you need in your device with an expected price of Rs. 28,990.

The Solana Saga was earlier called the Osom OV1. It was supposed to be the first phone from the new start-up Osom, but it was re-branded after a deal with cryptocurrency company Solana to offer a web3 smartphone.

The specifications are impressive, including a 6.67 OLED screen, Qualcomm Snapdragon 8+ Gen 1 processor,  12GB RAM, and 512 GB of internal storage. It also has a security feature to assist in keeping financial data confidential and safe throughout crypto transfers and NFT minting.

Previous article7 Best Skins for the FAMAS
Next articleHow Long Does It Take To Learn Azure?
Udit Arora

Chinese smartphones acquired the market with their affordable devices, but eventually, after the boycotting of Chinese products and...
Lifestyle

In the period of lockdown, people are forced to live a sedentary lifestyle. Nothing much to do, they...
Technology

The Redmi 8T has been launched in the European market and after the successful launch of its predecessor...
News

We all are eagerly waiting for 2021 for lots of reason. But as this year comes to an...
News

The much-awaited Moto G 5G has been leaked. It is probably the first 5G smartphone launched by the...
News

Best non-Chinese phones in India you can buy in 2020

It is challenging to choose a good and economic non-Chinese phones in the Indian market. Xiaomi, Realme, Vivo,...
News

Coronavirus pandemic has hit hard the Chinese smartphone manufacturers who have built a strong community connection in our...