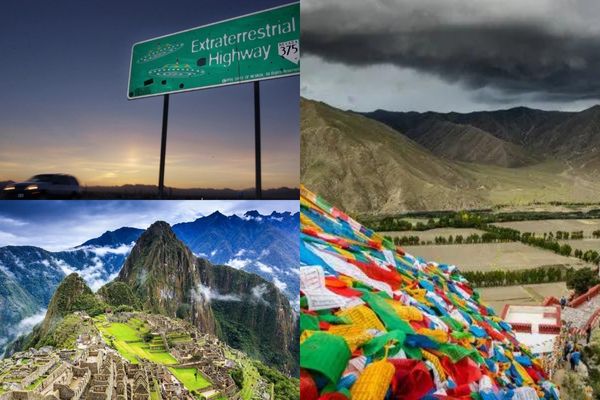 No Fly Zones are those where the aircraft activities are restricted in order to guard a significant person, a monument or important research or classified centre where govt experiments and keeps their super secretive data that general people should not come to know about. There are many popular no-fly zones in the world, like the White House and the Rashtrapati Bhavan in New Delhi, India. However, there are a few other places that you may not know are no fly zones.

Here are 10 No Fly Zones that you might not know about: One of the seven wonders of the world, The Taj Mahal is a beautiful white structure built by the Mughal emperor Shahjahan in memory of his beloved wife, Mumtaz. The place which attracts thousands of people every year from all over the world is actually a no fly zone. Due to security threats, no aircraft is allowed to fly near this highly protected monument. Surprised? How come and why Disney Parks are the no fly zones must be the question going through your mind right now. The Disney Parks in California and Florida enforced quite a few stringent rules after the attack of 9/11 in the USA. One of these rules was a temporary security measure that prohibited any plane from flying within 3000 feet of these parks. It became a permanent security measure in 2003. Tibet, a highly debated state which often gets in conflict with China, is also a no fly zone. However, it’s not due to the political tension. Tibet is filled with mountains, and the average elevation for areas in the state ranges up to 16000 feet. Therefore, most commercial airlines avoid the region due to its mountainous nature and unpredictable weather that could become the cause of a crash. Area 51 in the USA is highly discussed and debated on social media platforms. Some people say that the US government is hiding alien technology there, while some argue that the government has kept all the classified documents about their bad deeds in this place. We still don’t really know what the US govt does there, but whatever it does must be a matter of high importance as Area 51 is one of the no fly zones in the USA. Machu Picchu is one of the most protected landforms in the world. The historically significant region is home to many exclusive plant and animal species. In order to protect the beautiful ecological system of this place, planes are prohibited from flying over this zone. As it may be damaging for the site if a plane has to do an emergency landing. Mecca is the most significant religious place for Islamic people. Every year thousands of Islamic people visit this place as pilgrimages to get the blessings of their God. It is considered a holy land, and the journey to this destination is known as Hajj. Mecca is one of those no fly zones where any aircraft activity can face detrimental repercussions. Buckingham Palace in England serves as the residing abode for the Queen and her family. The most important members of England’s democracy live here. Therefore, it’s quite reasonable that the place is a highly protected region. No planes are allowed to fly over this site at any cost. Apart from this, Windsor Castle is also a no fly zone in order to protect the Royal family. Tower of Silence in Mumbai is a no fly zone that you definitely would not have heard about. This place served as the ritual for the exposure of the dead for the Parsi community. You can’t even visit this place on a whim. An organised travel plan is needed to go there and witness the historical aspects of Persian community. The Mathura refinery, located just about 50 km from the historical monument Taj Mahal is also a no fly zone. It is the sixth refinery commissioned by Indian Oil Corporation Limited. Due to the usage of sulphur and other reactive chemical substances, the govt has prohibited aeroplanes from flying over this zone. Golden Temple in Amritsar is the holy structure for the Sikh community. More than 1 lakh people are fed her every day for free. The place is loved for its calm and tranquil vibes. In order to keep that serenity intact government has declared it one of the no fly zones in India.

Flights are the most convenient and fastest way of travelling from one place to another. However, it costs...
Offers

The Maldives is a beautiful island nation located in the Indian Ocean. It’s also a popular tourist destination,...
News

Indigo one of the budget airline careers announces a new rule for flight check-in. This new rules state...
Offers

IndiGo Flight Offers 2023: IndiGo is one of the most popular airlines in India due to its being...
News

The University Grants Commission (UGC) has now announced final guidelines regarding admission and class schedule for the freshers/first-year...
World News

New Air travel guidelines to be implemented from 8 November for US travel would require passengers to provide...
News

AEC Introduces Digital Voter ID Cards: Get to Know All About This