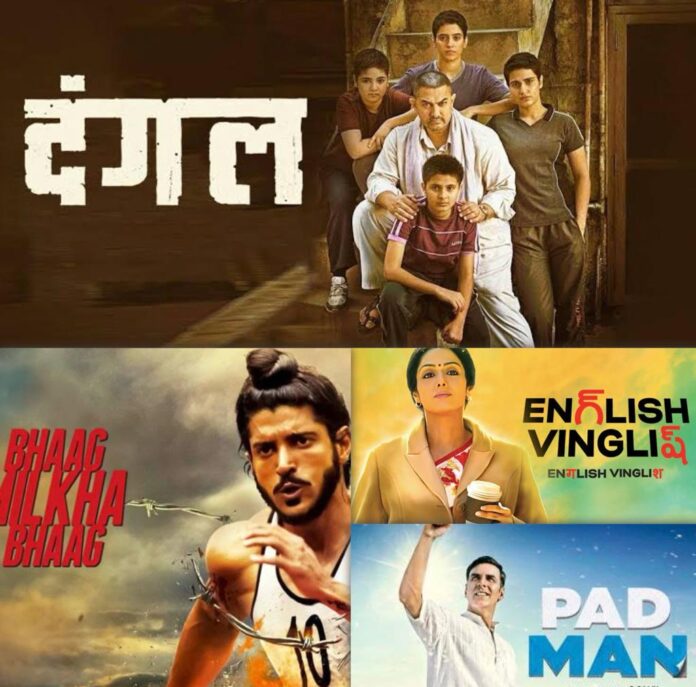 Bollywood films have had a significant impact on us through their storylines. They always find a way to teach us valuable life lessons through their works. They alter your thoughts or cause subtle changes in your behavior. Bollywood has some outstanding movies, along with the action, romance, and much too much melodrama. Sometimes we all talk about the same passionate melodramatic material that films in Indian movies have now and then. Nonetheless, the Film industry has produced several timeless old films that are still beloved after decades. Bollywood has some incredibly motivational and inspirational movies that will encourage you every time you see them. Today we highlight some of the inspirational movies made in the decade to get you encouraged. So, if you’re feeling down today, scroll down, and watch one of these movies

Feeling low? Here is a list of the 10 Motivational Bollywood movies to Stream online

Chak De India, one of Shahrukh Khan’s most popular movies, comes first in our list of the best motivational Bollywood movies. It is a sports film in which ladies of various races and beliefs get together to share their love of the game. The film shows us how to persevere in the face of humiliation from all sides. This film depicts how the coach and team faced numerous hurdles but overcome them all.

If you’ve ever been denied, the film Queen is a must-see. The film directly encourages and develops self-confidence. The film is about an Indian girl called Rani and how she overcomes all challenges and discrimination to have a happy life. Queen film teaches us how to appreciate one’s company and to be self-sufficient.

It is inspired by the true story of the ‘Flying Sikh,’ legendary Milkha Singh, and stars Farhan Akhtar. Produced by Rakesh Omprakash Mehra, the movie showed how Milkha Singh survived the death of his family due to division and poverty to become one of the country’s top athletes. The picture is about perseverance, dedication, and hard work, and it conveys a powerful lesson to never give up. Farhan’s change, both physically and psychologically, was impressive. This film inspires us every time we watch it and is one of the best Motivational Bollywood Hindi movies ever created.

Dangal is based on the real-life wrestlers Geeta and Babita Phogat. Although the film featured Amir Khan, the girls took the spotlight with their outstanding acting abilities. The plot centers around Mahavir Singh Phogat (Amir Khan), who wishes to raise boys in his family to become great wrestlers but is unhappy when he does not have any sons. But he soon understands that his daughters can wrestle since it’s in their genes. He then coaches them to become the best female wrestlers in the nation. The film is about women’s empowerment and changing people’s perceptions that girls can only perform housework.

English Vinglish is one of the best motivational Bollywood movies that convey an essential message to the viewers. Shashi (Sridevi) is a homemaker who is looked down upon by his friends and family because she does not speak English properly. But her life changed when she chooses to enroll in English classes while visiting her relatives in the United States. There, she encounters a group of people who are similar to her, and they teach her to respect herself rather than the limiting perspective imposed by society. This movie had a powerful lesson about valuing oneself above all else, and it was this theme that captivated the audience and won them over.

Gully Boy is a film that everyone should see at least once in their lives. From the plot to the cast to the humor and songs, this picture is a work of art. The film was produced by Zoya Akhtar and featured Ranveer Singh, Alia Bhatt, and Siddhant Chaturvedi in major roles. It is about Murad (Ranveer Singh), who resides in the Mumbai slums and aspires to be a rapper. The film conveys a powerful message about how society forbids individuals from dreaming, but what helps you fly is a little daring. And, of fact, Ranveer has excelled in his roles in the track Apna Time Aayega.  If you’re afraid of having huge dreams, watch Gully Boy.

Pad Man sends a crucial message to culture about the country’s hygienic conditions for women. The movie, produced by R Balki and featuring Akshay Kumar, Radhika Apte, and Sonam Kapoor, was both motivating and well-crafted. The plot centers around Laxmikant (Akshay Kumar) and his quest to make pads for his spouse, who has periods and uses unsanitary fabric. Following that, he builds a machine that produces low-cost sanitary pads and discusses how he promotes attention about it. The film did an excellent job of bringing up such an important and delicate subject.

Taare Zameen Par is a lovely story about Ishaan, an eight-year-old child who is mocked and disregarded because of his incapacity to study. Ishaan is compelled to enter a dormitory and despises it. He retreats inside himself and refuses to communicate with anyone. He even stops drawing, which was his favorite pastime. Ishaan’s new art teacher notices his unease and adopts him. The small guy grows and soon begins to act like himself. The impossible appears to be feasible with a little focus and a little magic occurrence.

3 Idiots is not just a comedy film but also one of the best inspirational Bollywood Hindi movies. The plot centers around the lifestyles of undergrads Rancho, Raju, and Farhan who attend a prestigious Delhi institute. The film depicts the enormous pressure students put on themselves to demonstrate their worth and the importance of studying for the sake of it rather than for marks. This humorous and emotive film will take you on a nostalgic journey while motivating and entertaining you.

Finally, a film depicts the difficulties that a salesperson faces. Harpreet Singh Bedi has just started working as a salesman for a multinational corporation. He quickly recognizes the inadequacies of the processes and launches his own business while still functioning for the corporate behemoth. Rocket Sales Corp, his company, quickly gained over consumers with its superior customer service. Harpreet goes on to become a successful entrepreneur and a joyful salesman. When your employer or your job is making you unhappy, watch Rocket Singh.

Read More: Going through Heartbreak? Here are 10 Bollywood Movies that May Heal You