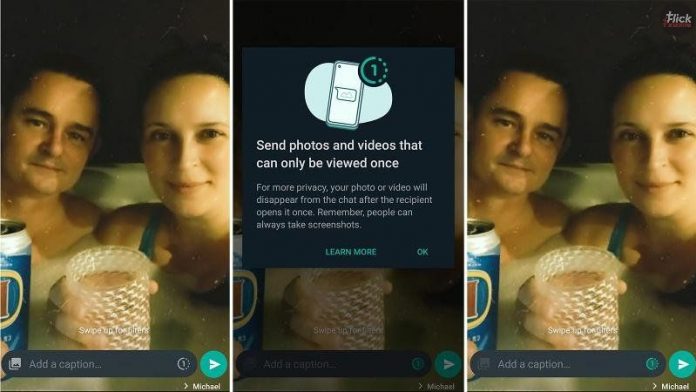 Recent reports suggest that Facebook-owned WhatsApp will roll out a new feature “view once” for its users, making it easier to send disappearing photos and videos in chats. The feature is basically on beta testing mode only on the Android platform currently. The messaging company has given this feature a name – “View Once,” and this was the most demanded feature that was requested by the users.


Currently, only beta testers have access to this new feature so that the company can fix all the bugs before launching it worldwide and sources also hint to us that WhatsApp will roll this feature to all users in the coming weeks. 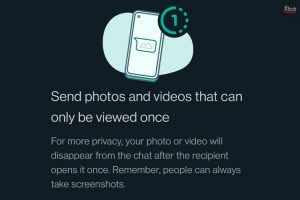 What is the “View Once” Mode in WhatsApp?

View Once is nothing but a new feature that the company will introduce for all its users that lets users privately exchange media involving videos and images and will immediately disappear after the recipient has viewed it.

Until now, the feature tells that the sender can see if the recipient has opened the image or video even if the sender has disabled read receipts. It would be wrong to say that this feature is completely private as one might assume because the receiver can take screenshots of the disappearing media once he/she opens them. Moreover, the messaging company won’t even notify you if someone has taken a screenshot of the disappearing media.

When the company was asked what they will do about notifying the option if someone takes a screenshot of the media, after admitting this limitation the company gave a statement that hints to everybody that it is not interested in creating a screenshot detection mechanism in the future. So, if you are a more secure person who doesn’t want to compromise his/her privacy, then it’s better to switch over to some other messaging platform like Snapchat.


This feature is quite similar to Instagram’s disappearing media feature. The sender cannot view the sent image or video by opening it. The sender can delete the message for everyone before the recipient opens it.

How to Use  WhatsApp “View Once” Mode?

As you are familiar with the usage of this new feature, now its time to learn how to use it in personal chats and groups:

What’s GB Whatsapp? Is it safe to use? What Features are there? Checkout Everything


Previous article
Jeff Bezos Steps Down as Amazon CEO, Here’s One To His Legacy
Next article
Nokia G20 Launched in India at Rs. 12,999: Listed on Amazon, Key Specs and Features Revealed
Flickonclick

Zoom has deprived many popular entertainment apps like WhatsApp, TikTok, and Instagram on Google Play Store to claim...
Technology

Those were the times when Facebook was at the peak when it comes to hacking an account and...
News

Yesterday, Whatsapp down created chaos for millions of users in India and several other countries worldwide. The latest...
Technology

Using dual Whatsapp accounts may sound fatigued but many of us choose this option. This is to create...
News

The E-wallets such as Paytm and PhonePay are the lifeline of people living in metros. After the demonetization,...