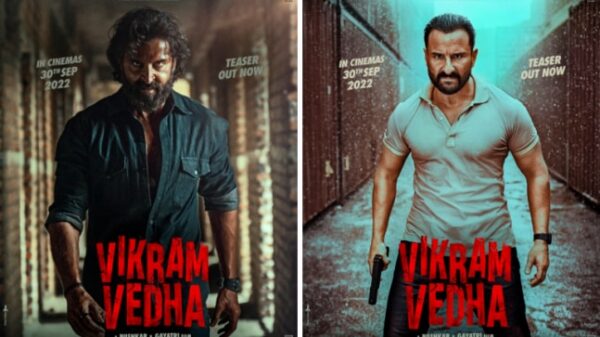 Hrithik Roshan plays the role of Vedha, while Saif Ali Khan essays the role of Vikram. The trailer gave the confirmation that Vedha is a criminal who is being pursued by Vikram, a police officer. However, not everything is as it seems.

One can guess by watching the trailer that Vikram and Vedha are both fighting their own battles, and their interest somehow collide. The trailer plays a line that says nothing is white and black; everything is grey. It hints toward something suspenseful and cryptic that we can only decode after watching this movie in the theatres.

Vikram Vedha trailer also showed glimpses of Radhika Apte and other main characters involved in the film. The high-octane trailer appears too short as one is deeply engaged while watching Hrithik’s evil avatar going against the uptight Vikram.

Vikram Vedha has been delayed quite a few times due to one reason or another, and fans were eagerly waiting for the announcement of the release date. The trailer has finally put an end to all the speculations as the film is slated to release on 30th September.

For those who don’t know, Vikram Vedha is a remake of a Tollywood movie of the same name. The original film starred R Madhavan as Vikram and Vijay Sethupathi as Vedha. The film received praise, and the Bollywood version is expected to achieve the same feat.

Here is the Vikram Vedha Trailer that is making the netizens go crazy on social media:

The holidays and weekend movie nights with the entire family are excellent ways to improve connection and spend...
Talent