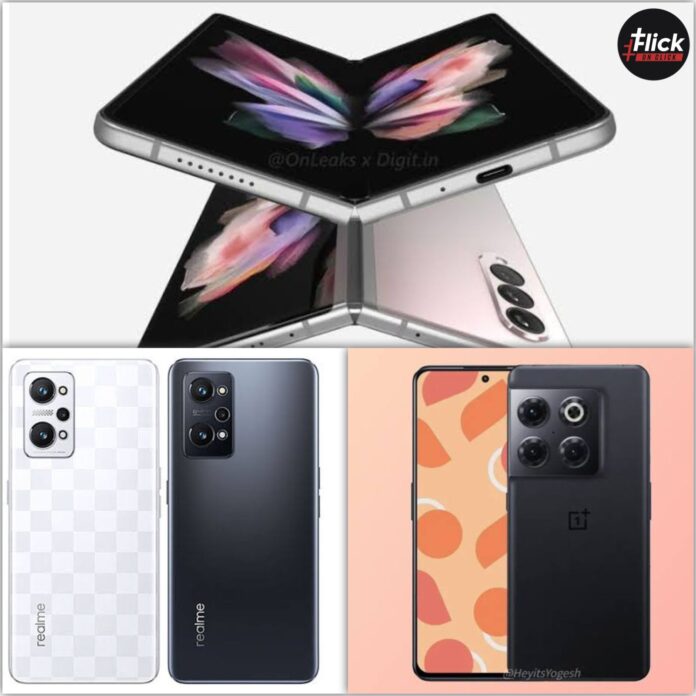 Flickonclick is your one-stop source for the latest update on upcoming phones and gadgets. The future mobiles area on our website contains information about unreleased smartphones, including their expected specs, prices, and release dates. With new phones being released regularly, you may want to have an understanding of their costs, features, and specifications before making a purchase decision. We have collected a list of upcoming phones to assist you in selecting a phone for your purchase.

There are numerous rumored mobile devices from prominent brands such as Samsung, Apple, Realme, Oppo, OnePlus, Vivo, Xiaomi, and others. Furthermore, you may categorize these upcoming mobile phones based on their quality, popularity, and price.

Here are the top phones upcoming in August 2022, ranging from speed-oriented flagships to folding handsets.

OnePlus 10T is projected to be the most capable Android phone ever released by any Company, not just OnePlus. The smartphone has the highest Performance score in terms of processing and will be equipped with the Snapdragon 8+ Gen 1 CPU, which is a newer, better version of the Snapdragon 8 Gen 1. According to rumors, the phone will also hold a 6.7-inch 120Hz touchscreen, up to 16GB RAM, a 4660mAh battery with 150W rapid charging, and a 50MP plus 8MP plus 2MP triple sensor configuration. It could debut with OxygenOS 12, which is built on Android 12. This Beast will be released by OnePlus on 3rd August.

Realme debuted the GT Neo 3T in the international market in June 2022, and there have been reports of the gadget arriving in India soon since then. The cellphone is set to be released in India in August. It will be driven by a Snapdragon 870 processor, have a 120Hz Amoled screen, Full HD+ resolution, a 64MP triple rear camera array, a 16-megapixel selfie sensor, and support for 80W fast charging. The phone could cost between Rs. 30,000 and Rs. 35,000 (Approx). The iQOO 9T, the sequel to the iQOO 9, will be unveiled on August 2. The Snapdragon 8+ Gen 1 processor and other flagship-level specifications are anticipated to be included in the update. The racecar-inspired appearance of the iQOO 9T, which we also have seen on the iQOO 9 and iQOO 9 Pro, has already been revealed by iQOO. According to rumors, the iQOO quill will provide 3 years of firmware upgrades and 4 years of security fixes for the iQOO 9T, however, this is yet to be verified. More information about the iQOO 9T will be available shortly.

Samsung Galaxy Z Fold 4 is one of the best upcoming phones in August 2022 in India. Samsung will have a large Unpack Conference in August, where the company will introduce the next phase of its foldable smartphones as well as the next wristwatch series. The Samsung Galaxy Z Fold 4 and Z Flip 4 will be available in India next month. Both of these foldable phones will be fueled by a Snapdragon 8+ Gen 1 Processor and will have a thinner design than their predecessors. Both foldable are projected to be slightly more expensive. The Galaxy Z Fold 4 is believed to have a better camera configuration, while the Galaxy Z Flip 4 is anticipated to have longer battery life.

Also Read: 10 Best Samsung phones in India that are worth buying in 2022

Motorola has already stated that a cellphone with a 200MP image sensor will be available shortly. Now, the Moto Edge X30 Pro has been discovered on Benchmarks, implying that it may be the gadget featuring a 200MP main camera. The Snapdragon 8+ Gen 1 chipset will drive it. The Moto Edge 30 Ultra is also said to have a 6.67-inch FHD+ AMOLED screen, a 144Hz frame rate, a triple rear camera configuration (200MP+50MP+8MP), and a 60MP front cam. Poco M5 is preparing to launch its next low-cost handset in India. It will be the successor to the Poco M4, which is presently available for Rs. 10,000 on Flipkart. The Poco M5 is rumored to come with a 6.4-inch screen, a MediaTek G95 chipset, a 64-megapixel primary lens, a 13MP front camera, and other features. It is reported to come with a 5000mAh battery and 33W rapid charging.

Following the popularity of the Vivo V23 Generation, the firm is preparing to launch the Vivo V25 Series shortly. Although Vivo has not announced anything public as of yet, sources indicate that the Vivo V25 will be released this month. The Vivo V25 is said to have a 6.2-inch AMOLED screen, a Snapdragon 778G processor, a 50MP triple rear camera array, a 16MP front camera, and a 4500mAh battery with 66W rapid charging functionality. The Vivo V25 Pro handset is believed to sport an Fhd+ Super AMOLED touchscreen, 120hz frames per second, Density 8100 chipset, and triple rear camera arrangement with 50MP main camera, 12MP ultra-wide sensor, and 2MP depth lens. It will feature a 32MP selfie camera and 80W quick charging.

Xiaomi 12 Lite was recently announced globally, and it will soon be available in India. The mobile phone is a mid-range device with high specifications and design. It has a 6.55-inch Full hd+ resolution AMOLED screen, a refresh rate of 120Hz, a 32MP front lens, and a 108MP main camera. It will be driven by the Snapdragon 778G processor, have up to 256Gb of space, and a rapid charging speed of 67W.

So, these are the eight smartphones that are likely to be released in August 2022. More will be included, and dates will be changed when the brands release them.

Oppo K10 5G was launched in India on 8th June 2022. The highlight of the smartphone includes a...
Offers

Get ready to do hefty online shopping because the Flipkart Big Saving Days Sale is back and probably...
Technology

Samsung to exit the entry-level smartphone market in India: All you need to know

Samsung, the Korean smartphone maker, is one of the top companies in terms of market share in the...
Technology

Opting for mid-range smartphones costing between 30-40k is one of the wisest decisions a buyer can make. Because...
Technology

Global smartphone brand, HMD Global who is a major distributor of the Nokia phones, is all set to...