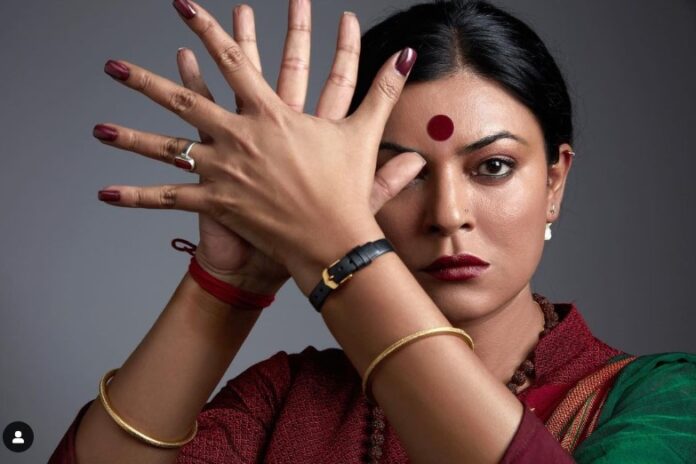 Sushmita Sen is going to essay the role of the transgender activist Shreegauri Sawant in the upcoming biopic movie Taali. The actress shared the news via her social media handle. Sushmita posted an image of her look from the upcoming movie.

The Bollywood actress further wrote, “Nothing makes me prouder & more grateful than to have the privilege of portraying this beautiful person & of bringing her story to the world!! ❤️ Here’s to life & to everyone’s right to live it with dignity!!! 🙏 I love you guys!!! #duggadugga 🤗❤️”

Sushmita Sen revealed that she is currently filming for the Taali. The first look poster of the film has given us a glimpse of her fearless look as Shreegauri Sawant. We loved her fiery look, and some of the Sushmita’s closed ones were also impressed by this.

Sushmita’s daughter commented on her post and wrote, “Maa❤❤❤❤❤ So so so so proud of you 🥺❤❤ Dugga Dugga 🧿❤ I love you the mostest 😘.” The Indian television actress Charu Asopa also shared her views and congratulated Sushmita. She wrote, “Wowww… First look is awesome.. so proud of you didi. looking forward …love you didi ❤️😍”

For those who don’t know, Shreegauri Sawant is the transgender activist whose efforts led the Supreme Court to legally recognise the third gender. She was the key aggressor in that movement that changed the lives of many transgenders in India.

By taking on this unconventional role, Sushmita Sen has clearly shown that she is here to do good stories and make an impactful comeback in Bollywood.

Actor Varun Dhawan claims that he has had invitations to act in south Indian films since the start...
Entertainment

The teaser of Janhvi Kapoor starrer Mili was released on 12th October 2022. The film is a survival...
Talent

As new era has begun in Bollywood where actors are only appreciated on terms of their acting skills...