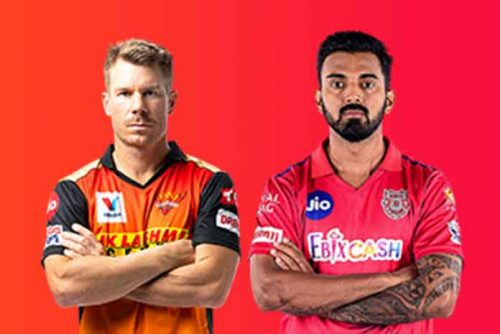 Sunrisers have been one team with a good lineup but they were not getting wins after doing a ton of things. Now, they have registered their first win against Punjab Kings as they won today’s game by 9 wickets. 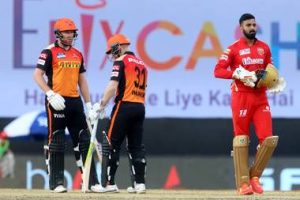 Starting off with the bat, the Punjab Kings initiated the first innings with openers KL Rahul and Mayank Aggarwal. Soon after, KL Rahul went back to the pavilion in the 3rd over with a total of 6 runs in 4 balls.

After that, the fall of wickets started with amazing performance from the bowlers and the fielders from the Sunrisers side.

Mayank Aggarwal and Shahrukh Khan were the two players scoring the most runs for SRH’s side, with each having 22 on 15 and 17 balls respectively.

In between, Chris Gayle tried showing off with bat but he too was sent back by Rashid Khan.

The whole squad was finished with a total of 120 runs in 19.4 overs as Sunrisers succeeded in sending back all the 10 players back to the seating area.

Khaleel Ahmad from the Hyderabad Sunrisers showed impeccable bowling performance as he took 3 wickets and maintained an economy of 5.25 through the game.

Coming to the second innings, Sunrisers started with their usual pair Jonny Bairstow and the skipper, David Warner.

While Warner started the game with a bang, he was sent back by Fabian Allen in the 10th over. During his period on the ground, he hit 1 six and 3 fours making a total of 37 on 37 balls.

But his partner on the other side, Bairstow took it slow and steady while still being aggressive and finished it till the last of the game.

Bairstow hit 3 sixed and 3 fours making a total of 63 off 56 balls with a strike rate of 112.50. Kane Williamson supported Bairstow from the other end after the fall of Warner.

The duo ended the game by chasing the score in 18.4 over and SRH registered their first win in this season of IPL 2021.

The IPL Pool table changed a bit with this also, SRH moved up to the 5th position on the table and PBKS slipped to the 8th position.

While RCB is maintaning 1st position constantly, the second position is captured by Delhi after their last win.

Now, if you’re done with this match, another one in which CSK has totalled up to a massive target of 221 for KKR in the current match is about to win the match

The match will be decided on how KKR’s side perform on the batting side, well! We’ll update you on the same. Keep checking out for the same and comment your favourite contender for today’s game.

IPL 2022 playoffs are scheduled to begin soon after the group stage concludes. All the teams have played...
IPL

This Sunday, the informal auditions for IPL 2021 concluded in the form of the Vijay Hazare trophy. Mumbai, led...
IPL

This time, the five-time champions Mumbai Indians (MI) seem to be off-track as they started off with poor...