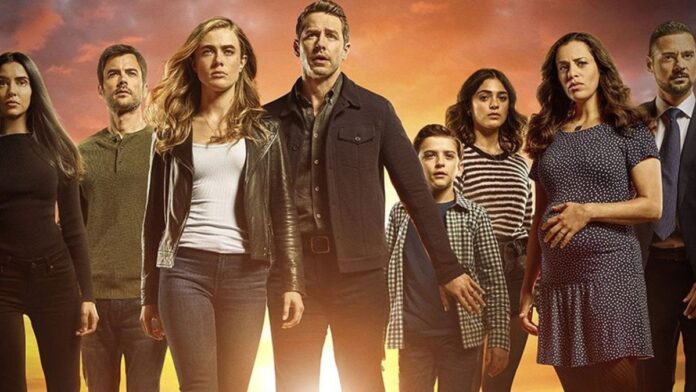 The first episode of Manifest Season 4 begins in Shanghai, with scientists conducting tests on an elderly man, ultimately revealed to be Henry. Instantly and unexplainably, a brilliant light protrudes from the lab, and it crashes. Henry staggers away, heading for the windier world.

The final season of ‘Manifest’ is a fantastic example of what a perfect conclusion should be. The creators have now begun to tie up all of the loose pieces that fans saw in prior seasons. It should be noted that the final season consists of twenty episodes separated into two halves.

While the first installment is now available on the streaming platform, the second installment will be available at a later date. Season 4 Part 1’s ten programs are now more on revealing why things occurred in the initial place.

The happenings of ‘Manifest’ Season 4 Part 1 commence two years after the season three finale’s cliffhanger when Grace was assassinated by Angelina, who subsequently hunts down Ben and Grace’s girl Eden. Ben’s continuous hunt for Eden has failed, and Michaela is now trying all in her power to stop the inevitable death of people in her family, which is now just a year and a half away.

Ben begins the story by constantly seeking her missing daughter. He is depicted carrying flyers and putting them in places where people would notice them. Meanwhile, Michaela goes to a port after receiving a ‘calling’ and meets Henry Kim, one of the passengers on Flight 828. Vance and Saanvi keep working on the secret inquiry into 828 from Eureka. Cal and Olive are now adults who are dealing with the trauma of abandoning their parents.

We also see in this series that the whole Stone family is now residing together, with Zeke providing ongoing support to all. His counseling skills come in handy when it comes to keeping the family together.

The series also demonstrates that there is now a dedicated section of law officials whose sole responsibility is to monitor the conduct of passengers aboard Flight 828. Travelers are forced to check in regularly and answer queries, the most important of which is whether or not they are experiencing hallucinations.

Manifest got off to a good start, with a story about a group of travelers on Flight 828 from Jamaica to New York, traveling through some heavy-duty storms before arriving safe and well. But when the cabin of that plane unlocked, everything had altered: five years had passed.

The occupants had been assumed dead, and, to make matters worse, they were now seeing random images and hearing things, among other things, which, when reacted on, led to individuals in need of assistance. Initially, the mystery surrounding the passengers’ absence was fascinating. Did they travel through time? Were they kidnapped by extraterrestrials? Was the world they were presently experiencing real?

Manifest Season 4 is off to a good start; it’s far superior to earlier installments. We’re finally receiving some answers, even if they seem implausible – divine consciousness? It will be fascinating to see if they can stick this touchdown after being given one last try.

Part 1 was released on November 4th, which is crucial because that is the moment Flight 828 resurfaced in New York. Part 2 is scheduled for April, to correspond with the plane’s abduction. Until then, happy viewing, and if you haven’t gotten on to Manifest yet, you still have 52 episodes to close the gap on.

Netflix announced that it will offer free subscription in India for 5th and 6th of December. This means...
Entertainment

All the movie lovers are always in the search of the finest movies to kick-start their new year...
Technology

Samsung has just launched the device which has been in the rumors for so long. Yes! We are...
Entertainment

Want to watch Romantic shows on Netflix? Check this Article

When you don't have to deal with broadcast tv rules and regulations, the concept of "romance" can differ...