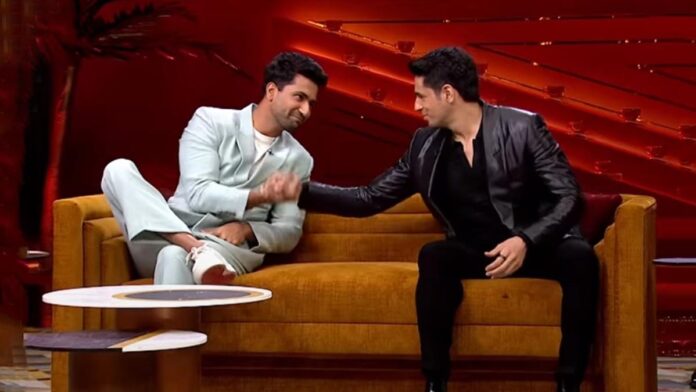 Koffee With Karan 7 is getting more excited and interesting with the advent of celebrities arriving on the show. In the latest episode of the talk show, Vicky Kaushal and Sidharth Malhotra made an appearance as guests. Their Punjabi Bromance had us all hooked to our TV screens. Vicky and Sidharth provided quite a few quirky answers to Karan’s unconventional questions that are currently ruling the internet. Who knew that we needed to see Sidharth Malhotra and Vicky Kaushal together on the Koffee couch to demand a movie with these two in the lead? 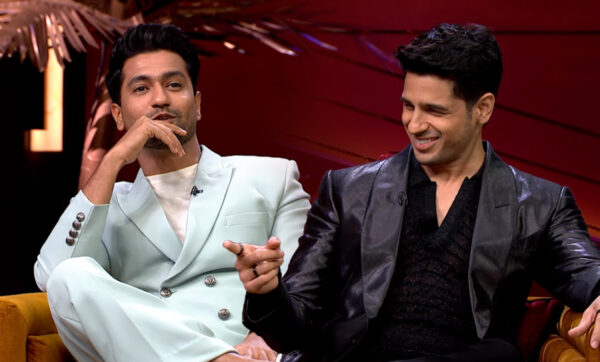 Here are the best moments of Vicky Kaushal and Sidharth Malhotra in the latest episode of Koffee With Karan 7:

This episode was packed with heartwarming and cute sequences that made us fall in love with two of the most soft-spoken actors of the current era. One endearing instance took place when Karan asked Sid what he missed about his ex. To which Sidharth replied, “Her cat”. For those who don’t know, Alia Bhatt is a cat lover and often posts photos of her cat on Instagram.

The last time when Vicky Kaushal visited Koffee With Karan, he said it loud that he likes Katrina Kaif. Fast forward to 2022, the couple is happily married, and there are rumours of them expecting their child. However, not totally confirmed though. Vicky Kaushal again created that epic scene where he metaphorically falls unconscious after hearing that Katrina said that they would look good together on screen. Vicky Kaushal and Katrina Kaif tied the knot in December 2021. The duo’s wedding became a topic of wild theories and discussion among the netizens. People were coming up with their own set of ideas about how the wedding will play out and posted their opinions on the same on their social media. Vicky revealed on Koffee With Karan 7 that he said to the pandit on his wedding day, “jaldi nipta dena” as he wanted the rumours to stop asap.

4- The SidKiara moment that set the internet on fire

Karan Johar played a clip of Kiara Advani from an upcoming episode of Koffee With Karan 7 to show Sidharth Malhotra that Kiara has admitted to being in a romantic relationship with the actor. In the video, Kiara says that she and Sidharth are “more than just close friends”. Kiara also described her life with the movie title Shershaah which she did with Sidharth in 2021. Furthermore, the clip showed Kiara saying this about her wedding- “I do see that in my life. But I’m not revealing that on Koffee With Karan today”.

Upon watching the clip, Sidharth Malhotra asked in the cutest way, “Kyu itna pareshan kia aapne Karan usko (Why did you trouble her so much, Karan)?” Later on, Karan asked whether he would be invited to the wedding as he had already planned what he gonna do at the event. KJO revealed that he has a big FOMO of missing out on weddings. Sidharth Malhotra calmed his nerves by saying, “Don’t worry, You won’t be missing mine”.

Karan Johar the ace Bollywood director who is always in the news for one reason or another has...
Entertainment

Thank God the trailer just dropped on YouTube, and it's going viral for the hilarity and humour it...
Entertainment

Vicky Kaushal, Kriti Sanon and many others win big at the IIFA Awards 2022, Check Details