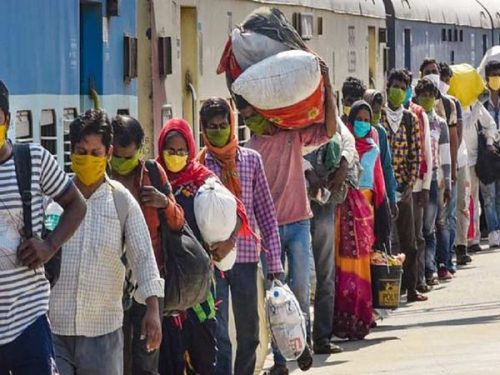 The Government of India has launched an online portal to keep a check-in point on traveling of all the migrant workers in the country. The platform, which is called the National Migrant Information System (NMIS) , is available on the National Disaster Management Authority (NDMA-GIS) portal.

Information of migrants to be entered in the dashboard

From the latest updates, the website allows every state government to track migrants easily. This information is then collected by the central government. The tally analysis of information from every state is uploaded on the dashboard which makes it very easy to track them.

Recently, Home Secretary Ajay Bhalla held a meeting with officials from the state governments regarding the transportation of the workers.

In the meeting, he brought everyone’s notice on the humanitarian crisis that India is facing. The migration has been a nominal part of the COVID-19 pandemic.

As per the instructions, the data is to be uploaded in Application Programming Interface (API). The state government is required to enter potential information such as name, age, mobile no, originating, and destination district, and date of travel.

As per the discussion, the central government has allowed the inter-state and intra-state migration of the workers. This has made possible with the start of public buses and “Shramik Trains” which have allowed easy and within time transportation.

Adding to the portal is the creation of separate IDs of each migrant. This ID is to be shown at every checkpoint on state borders. This ID can be linked with your number which makes it easy to track every individual.

In talks with the media, Affair Minister Bhalla praised the work of the officials who have worked under such serious circumstances. This much amount of work has been made possible with the consistent work of representatives at different levels.

He also mentioned that this will give a boost to all the officers and create a medium of speedy communication in-between them.

Bhalla confused by saying, “I urge you to use the online portal NMIS for capturing the information on the movement of migrants and for better visual coordination between the government and the workers.”

Previous article
Lockdown 4.0 in Delhi- Shops open on odd-even basis, Public Transport is back!
Next article
How To Recover Deleted Messages On WhatsApp? Checkout Now
Flickonclick

Delhi Metro is going to resume operation on Monday, 7th September 2020, after a full pause of almost...
Lifestyle

The Ministry of Civil Aviation has announced that starting from the 25th of September, the baggage policy for...
News

As tensions along the border continue, the Government of India has banned 59 Chinese apps including Tik Tok...
Offers

JioMart is changing the way we shop for daily items, groceries, and more. Now, when Reliance does something...
News

Netflix has come up with a new update Netflix Audio-only that allows users to ignore the visuals of...