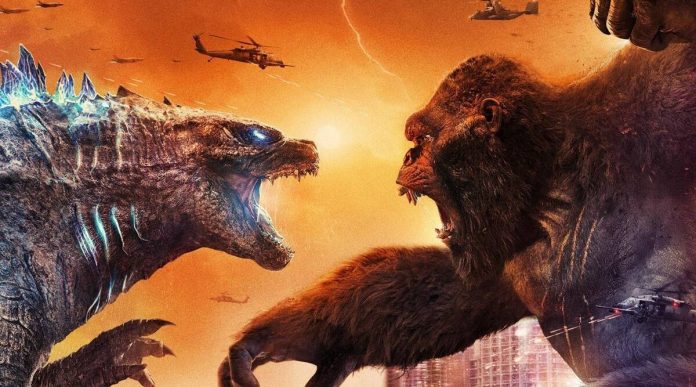 After New York and Los Angeles got reopened, Godzilla vs. Kong is on its way to deliver a huge sum of money to the exhibition as it looks for a comeback. The film set an opening record this past weekend with $123 million. The results are obviously clear that Adam Wingard’s legendary movie easily surpassed Warner Bros’ Wonder Woman 1984 in the first week, whereas Wonder Woman was able to collect $118 million globally. There is a long way to go for the mega-monster movie to bag more cash after its first week of release.

According to the sources, Godzilla vs Kong has booked more than 10,000 private screens at theatres in the U.S, a number that is way greater at the time of the release of Wonder Woman 1984. Godzilla vs. Kong is looking forward to being at the peak by Friday as many movie theatres are being operated on a short schedule and almost every screen is occupied by this giant film.

The movie has booked 3,000 theatres and that is a huge number during the pandemic after Tenet’s 2,810 and WW1984’s 2,151, if we closely look under the hood, then we get to know that this movie comes along with numerous asterisks in regards to B.O accelerators and decelerators.

For example, most popular cinemas of posh areas in Canada are not open yet, so in response to that, Godzilla vs Kong will possibly be available on PVOD (Premium Video on Demand) in the Great White North region, particularly on Cineplex’s online store.

According to the latest news, Regal, which is the No. 2 chain in the U.S., is more likely to reopen 22 locations out of its 542 nationwide by this weekend and these 22 locations are its biggest revenue generators that will contribute to making a huge profit. Some of the locations include LA Live Downtown, Valencia Screen X in Santa Clarita, CA, and the Irvin Spectrum; Union Square in NYC; Mira Mesa in San Diego; the Greenway Grand and MarqE in Houston; and Hacienda in San Francisco.

Warner Bros will have total command over Imax and PLFs for the whole month of April between Godzilla vs Kong and Mortal Kombat. The theatre counts go like this, 285 sites are Imax auditoriums, 650 are PLF screens, 700 are 3D, and 150 are drive-ins. This time Godzilla vs. Kong took away the best score out of the four legendary monster movies on Rotten Tomatoes with a current 80% upvotes. Godzilla’s is 76% fresh, Kong: Skull Islands is 75% fresh, and 2019’s Godzilla: King of Monsters’ is 42% fresh.

Previous articleThe Vampire Diaries: Stefan’s Love Interests, Best Characters of All Time
Next articleGuide to April Fool’s Day Tricks That May Not Leave Any Knives at Your Throat.
Flickonclick