Alia shared a photo on Twitter which she captioned, “Our baby .. coming soon.” In the shared picture, Alia Bhatt is going under sonography while Ranbir Kapoor sits beside her. Together the duo is looking at the monitor on which a heart emoji is placed to confirm that the duo is expecting their first child.

Earlier this year, Alia and Ranbir tied the knot in a dreamy wedding that many prominent Bollywood celebs attended. The wedding happened on 14th April 2022. Since then, the couple has been in the news for their movie Brahmastra, which is scheduled to release this year in September.

Wishes from Bollywood Celebs for Congratulating Alia Bhatt and Ranbir Kapoor for their Pregnancy: 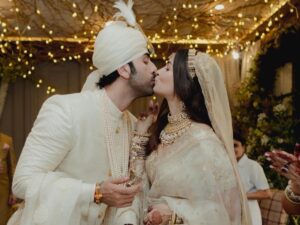 As soon as Alia announced the pregnancy via social media, many Bollywood celebrities took to the comment section to shower their love and wishes.

Karan Johar reacted with “Heart is bursting,” while Priyank Chopra commented, “Congratulations, honey!! Yaaaay! Can’t wait.” Alia’s mother was also pleased by the news and left a heartwarming comment for her daughter and son-in-law. She wrote, “Congratulations Mama and Papa lion.”

Praineeti Chopra, too gave her blessings and congratulations by commenting, “Congratss lovers!!” Many other B-town celebs like Anil Kapoor, Bipasha Basu, Farhan Akhtar and more extended their wishes for the couple.

Fans of Alia and Ranbir on social media are also going gaga over the latest news. Social media is lit with heartfelt congratulations and wishes for the pair.

Also Read: Everything you need to know about Ranbir Kapoor and Alia Bhatt&#8217;s Wedding