It is really good to see Abhishek Bachchan back on screen after a big break from Bollywood. Recently his new movie ‘The Big Bull’ got released, which is based on the life of a stockbroker Harshad Mehta, who created a sensation in the stock market.

You will be seeing Abhishek Bachchan playing the character of Hemant Shah in this film, also featuring Sohum Shah, Nikita Dutta, and Ileana D’Cruz. This project is the same as Scam 1992: The Harshad Mehta Story’ revealing the story of the most popular Indian stockbroker that shook the whole nation by himself. 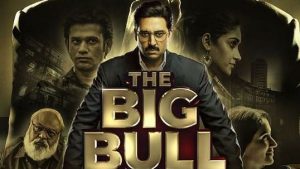 After the release of Abhishek’s new film, The Big Bull, the actor shared his family’s reviews in front of the media and also told his family’s thoughts about this film.

Abhishek said that his mother, Jaya Bachchan, hasn’t seen the film yet as she is superstitious and she would like to watch the film on April 9, that is, on her birthday. His wife, Aishwarya Rai, will also watch the film after it releases.

He shared a little bit about her mother that she doesn’t watch his movies before they get released and that is all because she is superstitious. He said that his family has seen the film and Ajay Devgan (producer) showed them first.

Also Read- Koi Jaane Na Review: Its better To Watch on The OTT Platform Rather Than Inside of a Theatre

Now Abhishek is waiting for her mother to say what she feels about the film as she will watch the film on her birthday as her birthday present.

He proudly said that the rest of his family really liked the film. He seemed to be happy because the only voice that matters to him has already endorsed the film, that is, his father himself, Amitabh Bachchan.

He further revealed that like his mother, his wife does not like to watch any of his films before the release. She has a habit of watching the films after they get released. The film will be streaming only on Disney+Hotstar on April 8, 2021.

Previous article
7 Best TV Shows and Movies to Watch on Voot Select, Disney+Hotstar & Netflix
Next article
The Bold Type is Back With a Fifth and Final Season: Here Are Everything You Need to Know About it
Flickonclick

No matter what genre you’re in the mood for, there’s always something good playing on SonyLIV. The streaming...