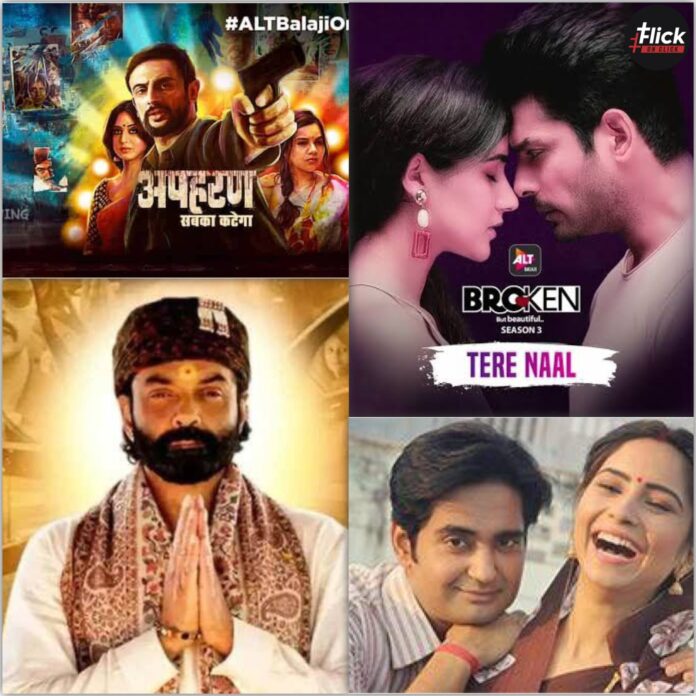 OTT Platforms like Alt Balaji and MX Player offer a wide variety of Hindi movies, web series, and Tv Programs. MX Player and Alt Balaji’s catalog has plenty for everybody, from comic and action to love and dramatic. Flickonclick has summarised one of the best content from Alt Balaji and MX player that will keep you hooked all the time to the screens. Scroll down to enroll in the best you can watch on Homegrown OTT platforms.

The series, directed by Prakash Jha, stars Bobby Deol as a self-proclaimed guru named Baba Nirala. He wields supreme authority, conducts a crime, and engages in politics, taking benefit of his believers’ naive faith. The web series showcases the true realities of some Guru and stereotypes beliefs of people in India.

Broken But Beautiful by Ekta Kapoor is a 2018 Bollywood love web series that comfortably ranks in the top 7 best web series on Alt Balaji. The series is about two folk’s passion, sorrow, and never-ending romance.

Apharan, a fiction of Siddharth Sengupta, depicts Rudra, a veteran inspector, who is convinced by the parents of a tiny girl to seize her. However, his plan to extract cash in exchange for her release goes disastrously wrong, placing him in serious trouble. Apharan is a suspense and thriller show that is worth streaming on Alt Balaji.

Mentalhood is a Rupali Guha-produced Indian Bollywood drama serial that marks the new show debut of star Karishma Kapoor. The show delves into the many personalities of mothers and how they deal with unjust expectations while trying to raise their youngsters.

The story follows Binny Bajpai, a 21-year-old woman who aspires to leave her typical middle-class character. As her family looks for the ideal boy, Binny undertakes her hunt for a rich young man who she feels will be her way out of her hometown. Pranati Rai Prakash, Atul Srivastava, Alka Kaushal, and many others feature in the comedy-drama. Watch Mannphodganj Ki Binny now on Mx Player for free.

Baarish, Ekta Kapoor’s 2019 Indian television show, was made for instant video platforms ALTBalaji and ZEE5. The show’s characters are Asha Negi and Sharman Joshi, who have opposed personas and live extremely different lives.

The show, which stars Apoorva Arora, Mayur More, and Gagan Arora, centers around first-time workers Raj, Simran, and Rahul who are compelled to work in the basement of their start-up company. The group faces bizarre obstacles as they attempt to reclaim their main floor area. Basement company features fresh blood talent and it is extremely funny and joyful to watch on Mx Player for free.

Amazon Prime is one of those platforms that have abundant movies and series to offer. And this May...