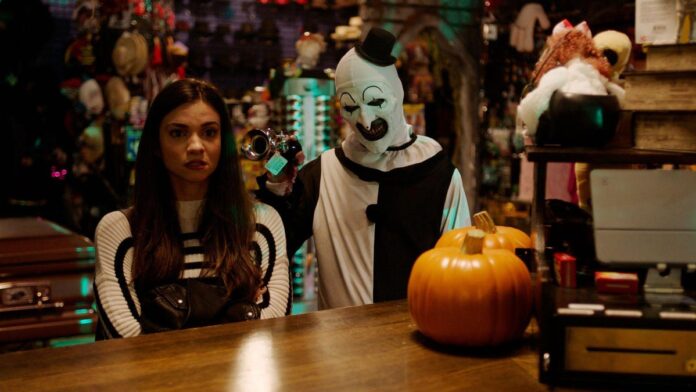 Halloween is just around the corner, and most of us are probably gonna party with our friends in our special Halloween costumes. However, some of us like to sit back and relax and watch a good Horror movie to get into Halloween. The costume parties and all are not for everyone, and we all surely know it. So, here we have found the most terrifying horror movies that are surely not for the weak-hearted.

This Indie Hollywood film is dubbed as the most brutal horror film ever. The blood and gore in this Horror flick are making people puke in the theatres. However, surprisingly the movie has become a hit out of nowhere despite its extreme visual of violence and blood-heavy crimes. The famous horror-fiction writer Stephen King also Tweeted about this film. It’s a must-watch for horror hardcore on Halloween. The movie follows a psychotic killer named Art The Clown.

If you don’t mind bloodshed, you will thoroughly enjoy this grotesque, violent display on your screens on Halloween. Three college students take up an offer of travelling to a hostel in Slovakia, unaware of the place’s deadly and terrifying secrets. The last scene, in particular, will stay in your memories for quite a long time.

Another horror movie that will keep you on your toes during its entire length. The Green Inferno focuses on a cannibal tribe. Sounds fun? A place crashes in the woods, and the survivors of the crash end up being abducted by a tribe of cannibals where they will have to go through various uncanny and terrifying trials and tribulations.

Raw is a disturbing horror movie that’s not for vegetarians. Justine, a lifelong vegetarian, is forced to taste meat during her time at veterinary school. She then develops quite a strange liking for the meat that completely changes her life. It gets weirder with its premise, and we promise only hardcore horror lovers would have the guts to watch this on Halloween.

Alexandra Daddario a well-known face among Hollywood stars in this violent horror movie that you should consider watching on Halloween this year. A woman inherits a mansion from her grandmother and reaches the place only to find out that a chainsaw-wielding killer is waiting to unleash hell on her.

Written and directed by Damien Leone, the man who is behind the Terrifier films, All Hallows’ Eve also features Art The Clown killer. A babysitter finds an old VHS tape which contains three terrifying tales of horror. As the night goes on, strange things start to happen around her. And not just her, even we are scared like hell while watching this film.

Also Read: 10 Best Horror Movies on Hotstar to Watch for a Spine-Chilling Adventure

Mark and Jennifer, two journalists, are trying to track down a demented serial killer who poses as a clown. However, they don’t realise that the man they are looking for is closer than they actually think. One of the most terrifying horror movies we have ever seen and definitely a film that you may consider watching on Halloween.