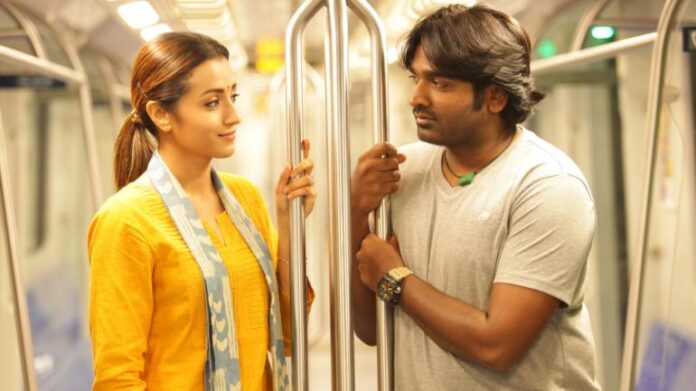 Romantic films have always gone beyond the language as love has its own language to which people can relate without understanding the words. The best Tamil romantic movies which have been released boast beautiful love stories that will make your heart melt.

The most romantic Tamil films may even make you cry with their emotional storylines. On the other hand, some Tamil romantic dramas will make you laugh out loud. These are the perfect films to watch with your partner on any day. You don’t need an occasion to celebrate the uniqueness of these best Tamil Romantic movies.

Any list of Tamil romantic movies is incomplete without adding this masterpiece that mesmerised us with its relatable and soulful storyline.

The movie is a romantic drama that focuses on a Christian Zumba instructor who falls in love with a high-caste Hindu girl. Their love blossoms but so does the problems in front of them.

In order to be happy together they must fight off the caste divide in society. It’s one of the best Tamil romantic movies and perhaps the best film of Naga Chaitanya in his career.

This is one of the best Tamil romantic movies of all time due to its interesting and intriguing plot that keeps you hooked from the beginning till the end.

The movie follows a woman who spots a painting that replicates the fairy tale that she used to hear in her childhood. She then begins an adventure to find the man who had painted the art piece.

This ultimately results in a beautiful love story that anyone will find quite enjoyable to watch. Famous Tamil actor R Madhavan played the lead in this film.

One of the most critically acclaimed Tamil romantic movies of all time, 7G Rainbow Colony is a beautiful and poignant love story.

The Tamil romantic film follows a guy who falls in love with his new neighbour. He tries everything to win her love but always ends up making a fool of himself. Will he be able to ultimately win her love?

Those who love stories that span quite a few decades will certainly find this highly-rated Tamil romantic movie a delight to watch.

The movie follows a man who goes to the reunion of his school and meets up with his childhood sweetheart. On seeing her he becomes infatuated with her beauty and tries his best to make her fall in love with him.

It’s a sweet drama that will keep you engaged for its entirety.

This list of best Tamil romantic movies would have been incomplete without Sillu Karupatti in it.

The movie is not just about a single love story. Instead, it’s told in an anthological way and depicts four different love stories from different age groups and backgrounds. The diversity of love in this romantic film is very exciting to watch.

If you have loved Modern Love Hyderabad then you will definitely love this Tamil romantic film.

Also read: Top 10 Telugu Romantic Movies of All Time to Watch on OTT

One of the best Tamil romantic films that have an inspiring tone which will motivate you to strive for success in your life.

The movie follows Kamali, a young woman, who strives hard to land a seat in a prestigious educational institute. Her journey soon inspires others from her small village to follow in her footsteps to pursue higher education.

Now, you must be wondering about the romantic drama in this film. Well, worry not it has it all. It’s a must-watch on this Tamil romantic movies list.

Till now, we have listed the Tamil romantic movies that deal with how two people can actually get together at the end after overcoming several adversities.

However, this movie is quite different. As two people do end up getting married in this Tamil romantic film but then start to experience problems in their lives.

The movie follows Prabhu, an orthodox man, who falls in love with Althea, a free-spirited, single mother. However, when they both get engaged, they realise they are very different from each other and tensions start to rise between them.

Easily one of the best Tamil romantic movies of all time Merku Thodarchi Malai is one of those films that you can’t afford to miss.

The romantic Tamil film follows a labourer who wishes to own land. His dreams do come true with the help of a politician but then he faces bigger challenges in his life.

In between all this, he must maintain a love life as well. The romantic movie has an IMDb rating of 8.0 which guarantees that it is a very good film to watch.

Now, let’s talk about this Tamil romantic film that showcases a modern love story in its purest form.

The film follows two young people who meet each other at a wedding function and fall in love. They decide to enter into a live-in relationship as they do not believe in the institution of marriage.

Last but not least on this list of best Tamil romantic movies to watch online is Bachelor a film that made us laugh and cry at the same time.

A couple in love moves in together. However, they soon break up due to the miscommunication and other problems arising out of the actions and behaviour of their counterparts.

Their love story does not end here as they ultimately move to court against each other. What will happen next? Watch now to find out.

Some of the great benefits of subscribing to Disney Hotstar are the availability of Bollywood and Hollywood movies,...
Entertainment

It is a universal truth that every time you see a sequel movie, you are stuck with a...
Entertainment

Netflix has an interesting collection of Tamil & Telugu Movies that deserve to be explored to the fullest....
Entertainment

In the period of quarantine, everyone in the world is locked down. With Nothing much to do, most...