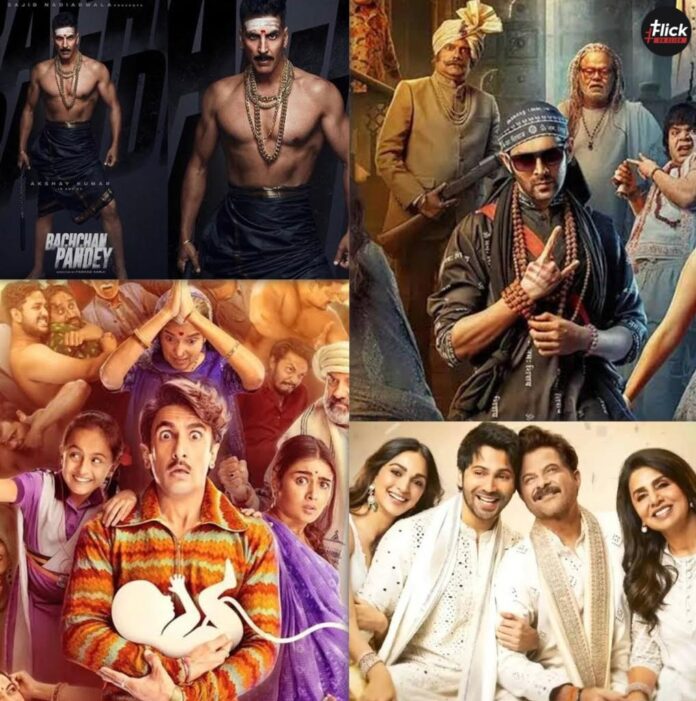 From time to time, Bollywood has produced excellent comedies. And who doesn’t enjoy watching comedies? Sometimes we simply want to kick back and admire light-hearted comedies without having to think too hard. It provides us with some respite from our stressed lives. It might also serve as an excuse to get together with family and acquaintances. Bollywood  Comedy movies made in your region are extremely relatable since they simply depict scenarios that we are all too familiar with. These films will leave you chuckling with their hilarious desi dialogues. There is no doubt as to why people enjoy this particular genre. Today Flickonclick is going to list the latest Bollywood comedy movies in 2022 that will make you giggle louder.

JugJugg Jeeyo, directed by Raj Mehta and featuring Varun Dhawan, Kiara Advani, Anil Kapoor, and Neetu Singh, was premiered to excellent feedback. Following a strong launch weekend, the film’s box office continued to climb during its first week. The story revolves  When divorced couple Kuku and Naina arrive in India from Canada, expecting to break the news of their upcoming divorce after the big giant desi wedding in the home, they have no idea that an even larger surprise awaits them back in the house.

The Anees Bazmee movie drew parallels to the original, but it holds its own with amazing performances from Kartik Aaryan, Kiara Advani, and Tabu. It’s challenging to watch a sequel without drawing similarities to the original. Bhool Bhulaiyaa 2 comes under this category, as the original one, featuring Akshay Kumar and Vidya Balan, was a huge box office success and has since achieved cult status. In 2022, Kartik Aaryan and Kiara Advani are attempting to rekindle the same chemistry. Bhool bhulaiyaa 2 is a one-time watch and contains a lot of comedy content, stream the second sequel now on Netflix.

Looop Lapeta, created by Aakash Bhatia and starring Tahir Raj Bhasin, Taapsee Pannu, and Shreya Dhanwanthary, is a remake of Tom Tykwer’s acclaimed 1998 cult hit Run Lola Run. When her partner misplaces a mobster’s money, Savi must race against the deadline to rescue the day if she is to break free from a strange loop of dead ends.

Bollywood’s obsession with using humor to tell stories about taboo issues appears to be paying off well. When it comes to a touchy matter like homosexuality, movies like Shubh Mangal Zyada Saavdhan and Dostana have depended on this notion and excelled in bringing out positive sentiments. As a result, it’s not surprising that Badhaai Do uses a lighter tone to convey a critical topic with little-little comedy punch in the movie.

Bachchhan Paandey is a copy version of the Tamil movie ‘Jigarthanda,’ which was released in 2014. Bachchan Pandey is Farhad Samji’s little contribution to that list. Kumar portrays feared gangster Bachchan Pandey, while Kriti Sanon represents Myra, an ambitious director who intends to direct his biography. Bachchan Pandey is about how she tackles obstacles and if she and Pandey achieve their goals in life.

Jayeshbhai Jordaar, Ranveer Singh’s one of the best Bollywood comedy movies, expertly tackles the delicate subject of female foeticide while yet trying to amuse your laugh. Shalini Pandey of Arjun Reddy renown portrays Ranveer’s spouse/wife Mudra, the daughter-in-law of a panchayat (Boman Irani) who would do everything (quite literally) to earn his kuldeepak in the movie produced by Divyang Thakkar (heir). While the plot may appear to be conventional, the jordaar portrayals by Ranveer, Shalini, and other performers, particularly young artist Jia Vaidya, make this a must-see.

Read More: 10 Bollywood comedy movies that will make you Giggle out loudly

Previous article10 Thriller web series in Hindi to Watch on OTT Platforms in 2022
Next articlePonniyin Selvan: All You Need to Know about the Mani Ratnam Film
Udit Arora

For the past two and a half months, the government has provided authorization for cinema halls to open,...
Entertainment

Hindi thrillers movies are still one of the most beloved categories, with millions of fans all over the...
Entertainment