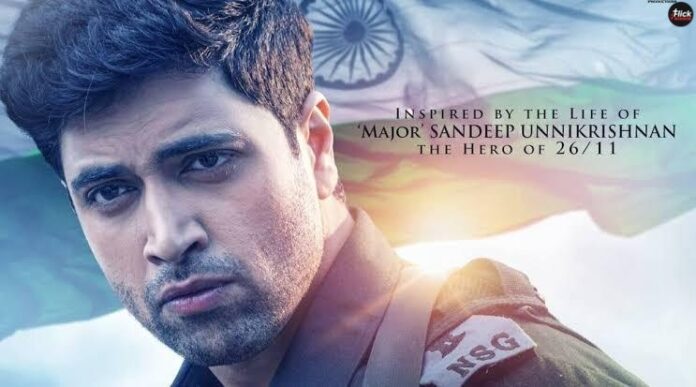 After a great run in theatres and at the box office, Major Sandeep Unnikrishnan’s incredible story made its OTT premiere on Netflix on July 3. The film “Major” is a biographical action thriller based on the true story of Major Sundeep Unnikrishnan, a military officer who fearlessly confronted terrorists in the Mumbai Taj hotel on November 26, 2008.

Based on the true story of Major Sandeep Unnikrishnan who was an Indian Army officer on deputation with the National Security Guards’ elite 51 Special Organization. He was killed in action during the November 2008 Mumbai terror attacks and was granted India’s highest peacetime gallantry medal, the Ashoka Chakra, on January 26, 2009.

Major was a box office hit. In less than a week, the film made more than Rs 50 crore and grabbed hearts with stunning performances. Soon after, its worldwide box office collection surpassed Rs 60 crore.

The film’s major team, which included Adivi Sesh, producer Sharath Chandra, and Hindi lyricist Ritesh Rajwada, also interacted with UP Chief Minister Yogi Adityanath, who complimented the film. Sesh shared his delight on social networking sites. He shared photos from the event with his admirers. Sesh and the film crew met Adityanath along with the parents of Sandeep Unnikrishnan. Furthermore, the UP Chief Minister presented the actor with a shawl and a silver precious metal.

Major, a film by Adivi Sesh, is available to watch on Netflix. Moreover, this online streaming is available in Telugu, Hindi, and Malayalam.

Major is a wonderful honor to Sandeep Unnikrishnan, and his tale is worth revisiting and remembering. The film delivers on its promises; the first half is fair, but the second half is fascinating with a good climax eventually culminating in a tear-jerking ending. Moreover, Adivi Sesh has given the best performance of his career. Watch this amazing film on Netflix.

Read More:New and upcoming series and movies to release on Netflix in July 2022