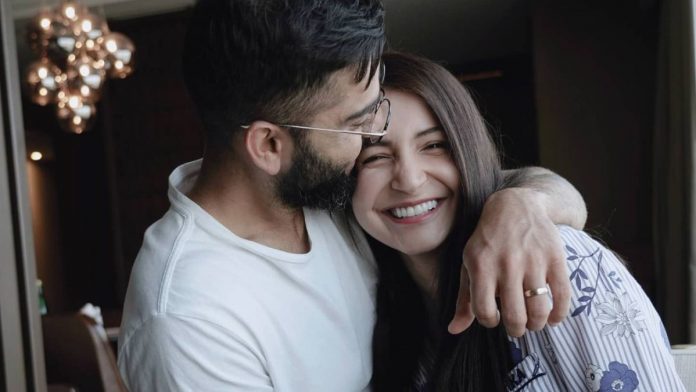 What a heart-melting picture has been shared by Virat Kohli on his Instagram account. He posted an adorable and charming picture of himself delicately kissing his beautiful wife Anushka Sharma on her forehead. This picture was shared on the occasion of their daughter Vamika turning two months old.


By looking at the picture closely and observing Anushka’s natural smile, it can be said that this picture was taken candidly in order to capture the couple’s happy mood. In this picture, Anushka is wearing a blue-and-white striped pajama set with printed floral designs. Whereas Virat Kohli is wearing a half-sleeved white T-Shirt and in the caption, he only added a heart emoji to express how much he loves his wife.

After seeing this couple’s sweet picture together, fans couldn’t wait and smashed the like button. The post crossed 6.5 lakhs likes in less than 10 minutes and liking was not the only thing that their fans did, in fact, the fans showered their love in the comments section too. One wrote, “virushka 4evee” and another fan wrote “Sweet couple”.

On the other side, Anushka also couldn’t stop herself sharing a picture on her Instagram story on the occasion of Vamika turning 2-months old. She shared a picture of a cake decorated with stars and a rainbow on top of it and said “Happy 2 months to us!”.


January 11, 2021, was the day when Vamika arrived in this world and into the couple’s life. Recently, on the occasion of International Women’s Day, Virat proudly shared a picture of Anushka holding Vamika and praised her wife for being the strongest woman he knows.

After fulfilling his family duty, Virat will next be seen in action on Friday where he will be seen leading team India in the first of five T20Is against England. On the field, Kohli will take his team preparations seriously for the upcoming T20 World Cup that is scheduled to be held in India later this year.


Virat Kohli addressed the media on Thursday and announced that Bhuvneshwar Kumar will be back on the ground after a long injury lay off and will play the match on Friday. He also mentioned that Bhuvneshwar is one of those great players who can be relied upon for the upcoming T20 World Cup.

He also lifted the curtains from the opening batting order by saying that K L Rahul and Rohit Sharma will open the batting for India in the T20I and with this formation, India can play freely and can take necessary risks whenever needed.

Anushka Sharma or Alia Bhatt? Who is a better actor?

Over the last decade, Bollywood has evolved dramatically. From the types of movies made to the box office...
Entertainment

Anushka Sharma is one of her own class. She's one of the finest actresses that have promisingly delivered...
Entertainment

Anushka Sharma, one of Bollywood's most recognized, loved, and beautiful actors, has made a great place for herself...
Talent

Do you ever randomly wonder how much percentage cricketers like Virat Kohli and MS Dhoni got in their...