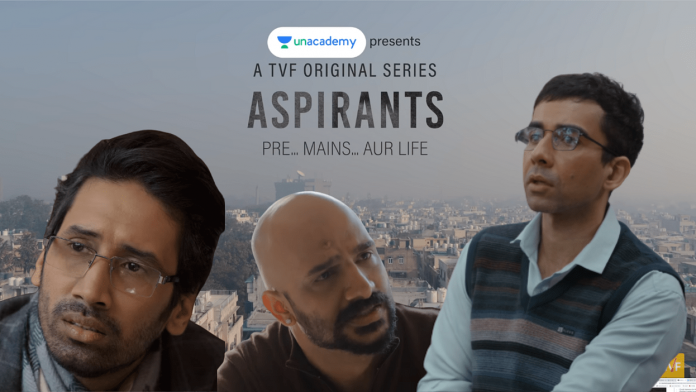 TVF Aspirants Review- TVF, which is one of the most successful content creation companies in India, is back with another one of their masterpieces. This time again they are back with a web series which goes by the name ‘Aspirants’. For now 3 episodes are out. 4th one is expected to release on 28th April.

Well! You must have guessed by now, that what TVF Aspirants is all about. Well! Yes, it’s about the life of a student aspiring to crack the UPSC exams.

In the main lead, we have Naveen Kasturia, Namita Dubey, Sunny Hinduja; Abhilash Thapliyal, and Shivankit Parihar. After giving numerous hits such as Kota Factory, Pitchers, this time also, TVF is ready to break all records.

The first two episodes which were released on April 07th gained a total of 9.9 Million views each and still counting. The latest episode in the web series has been released yesterday, the 21st of April 2021. Which is also gaining positive reviews from all across the industry and audience.

Let’s take a closer look at all the episodes that have been released till now and get to know the series a little better.

The story of TVF Aspirants  revolves around the past and the future, yes! That’s a very dynamic concept of storytelling brought to us by The TVF team. Also, the simplicity of the show with a touch of drams is something that makes us connect with the show yet giving it a larger-than-life aspect.

Now, coming to the summary, among three friends, one of the guys who was considered a nobody has become an IAS Officer and is now living a changed life. But the rest two, are still in the same place and this is what will take you back into a realm of future-past scenario storytelling.

Everything starting from the hustle involved in the preparation, daily life, and more to the journey of actually becoming an IAS Officer, everything is perfectly depicted here.

The acting, cinematography, writing, and anything that you see on or off-screen has been developed with such a charm that it makes the overall web series, a fine piece of art.

Also Read- Top 10 TVF TV Series of All Time: Series That You Should Never Miss

The soundtrack alone is enough to give you goosebumps. Moreover, if you haven’t watched it yet, then we’re linking the episodes down below. Also, when you do watch the show, don’t forget to subscribe as TVF’s only going to release Aspirants 4th Episode  after they hit 9 Million Subscribers on Youtube. Enjoy!