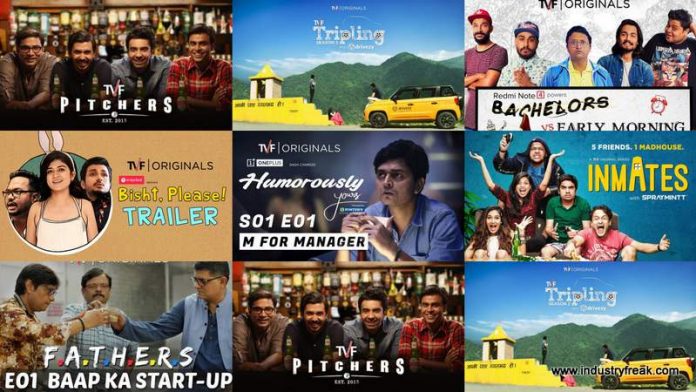 You can never expect less from TVF when it comes to TV series. It is successfully delivering marvelous shows for so many years and it has never disappointed us. TVF has introduced so many great actors to us that we have become their die-hard fans and following them every day on social media like Facebook, Instagram, Snapchat, etc.

We know that how much you love TVF series, that is why we have prepared a list of all the best TVF series that are must-watch and you will definitely want to watch over-and-over again.

This was the very first time that TVF paid attention to make a drama that depicts the life of a freshie in a software company where he has to code in his cubicle all day through its lens. The show promises to drive you and give you an experience of a corporate world that how stressful it is and how a person learns to stand upon himself/herself when he/she is living independently. Starring Abhishek Chauhan, Nidhi Bisht, Arnav Bhasin, Badri Chavan, Khushbu Baid, and many supporting actors.


It takes you into retrospection of your own hostel days when you were in college. This funky drama is packed with a story of a bunch of newbies who aren’t familiar with the hostel rules and the way of living in it. This show consists of all the good memories which a student had absolutely experienced during his hostel days, starting from ragging, to fell in love and finally studying a night before an exam. This is a must-watch as it will drive you back to your personal memories.

This show is set in the 1990s that will absolutely refresh our childhood days. Those precious days that we haven’t forgotten at all and sometimes retrospect whenever we get time. Here in the story, we have a 12-year-old protagonist who is chilling in his summer holidays along with his friends. Drinking Rooh Afza, using cordless phones, air coolers, playing cricket all day were those precious things which we did when we were small, has been shown in the story. It’s worth watching that allows you to travel back into your childhood again and enjoy it thoroughly.


How can someone miss this masterpiece that has been a huge hit on the internet? Kota Factory has beautifully explained the stress students face every day among thousands of other IIT aspirants and how they are deeply sunken into their books and have totally forgotten that there is also a world outside Kota too which they should live. The pressure they have to go through and the high level of competition is a life-or-death situation for them.

Who could have imagined that a show on struggling of becoming an entrepreneur will be made? This is a story of a group of four men who are confident about their product and want only one chance to show investors how good their product is and want to start with their own company with investments. All the men belong to different job backgrounds and this is what makes their team perfect to grab the opportunity. Everyone knows that a company cannot be established without complications and this is what our team has been facing in the entire story.

Experience comedy and drama of rural India and its people with the very talented Jitendra Kumar, also known as, Jeetu, along with Raghubir Yadav and Neena Gupta. This is a story of a man who becomes the secretary of a rural village and came to join his duty by leaving his city and lifestyle. But he didn’t have any idea how frustrating the job could be as he gets stuck into the lives of innocent villagers and helps in solving their problems.


Stand-up comedy has become a necessity these days as somewhere everybody wants a little laughing factor in their life and this is what this show has brought. But this is not limited to only laughter, it is a story of a struggling stand-up comedian Vipul Goyal, who haven’t got the fame which he is looking for and struggling every day in his field to grab more attention of his audience. But between those punch lines lies his life which isn’t easy as it sounds. Catch this comedy-drama to make your weekend more fun and exciting.

This is a story of a middle-class family comprising of four members – mother, father, and their two young sons. Everyone has their own way of examining the meaning of life and seeing through it. Despite day-to-day challenges the family still manages to stay in unity and faces all the complications happily. And now, the second season has been released last month and is streaming on SonyLiv. It is fun to watch the life of a comic family on a screen and analyzing its way of living.

This show rides you back to your teenage memories where you have fallen in love at least once in school and this is what has happened with Dhruv Sharma who tries really hard to finally confess in front of her crush that he really likes her. A shy guy like Dhruv couldn’t do this alone, but thanks to his two friends who were his back-up all the time.

One of the best TVF Originals series. The series revolves around the life of a young couple who after being in a long-distance relationship of three years, face the prospect of marriage. It will be fun to watch the couple facing complications after living together and how they resolve those small frictions which mostly generates when two people share the same roof.