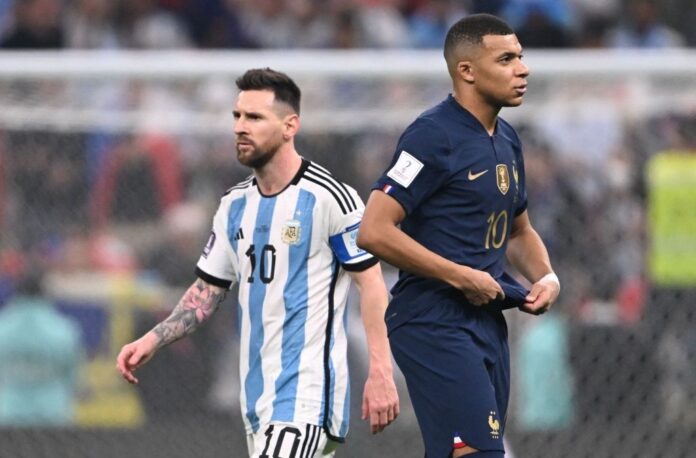 While Lionel Messi finally won the World Cup trophy when Argentina defeated France in a penalty shootout, the man who stole the show at the grandest stage of them all was the French footballer Kylian Mbappe. Argentina was up 2-0 till the 80th minute and France looked completely flaccid in the game. However, it was the genius of 23-year-old Mbappe which brought back France into the game. He scored 2 goals in the span of 2 minutes to shock the Argentinians and Messi fans across the globe. Mbappe then single-handedly managed to tie the score once again when in extra time with a third goal. He even blasted the first penalty for France in the penalty shootout into the goalpost. A legend was born that day and that legend will surely surpass Messi, Ronaldo, Pele and Maradona in the future.

It was just the sheer brilliance of Mbappe that stopped this moment from being the best of FIFA World Cup 2022. Lionel Messi came out of retirement in 2017 after retiring a year earlier and somehow has managed to overcome all doubts and hurdles in his journey to lift the trophy for France. He has now scored 13 goals in the history of the FIFA World Cup. In the final between Argentina and France, he scored two crucial goals to guide his team to victory. As many are saying Messi has finally completed the football. He is the GOAT and Cristiano Ronaldo fans needs to acknowledge that now.

Saudi Arabia was given no chance when they played against the ultimate World Cup winner Argentina in the group stage. They were down in the earlier phase of the game but showed great resilience and willpower to ultimately bounce back and script a historic moment in the FIFA World Cup history. No one can forget the epic upset they pulled off against a mighty Argentinian team. It will be remembered for ages to come.

Japanese team pulled off some major upsets at this year’s FIFA World Cup. The Samurai warriors were down 1-0 against the Spanish team in the final match of the group stage. However, they snatched back the lead and ultimately scored one more which guided them to the knockout stages. It was an emotional moment for all Japanese football fans across the globe. The dreams of winning a FIFA World Cup seemed possible for the very first time for Japanese fans.

In Portugal’s match against Uruguay, there was a huge controversy when Cristiano Ronaldo celebrated a header which became the first goal for his team in the game. However, it was later revealed that the ball had never touched his head. That goal came in the 54th minute of the game from Portuguese attacking midfielder Bruno Fernandes.

The goal has officially been ruled as scored by Bruno Fernandes #POR #URU https://t.co/3NN2pbupe0

Cameroon surprised everyone when it secured a hard-fought victory against the World Cup giants Brazil in their group encounter. Even though Brazil almost played with its second string it was a remarkable victory for the Cameroon national football team. Since defeating Saudi Arabia in 2002, Cameroon had not experienced victory in a World Cup game. After Didier Drogba in 2010 and Joel Matip in 2014, Aboubakar is the only other African player to have scored against Brazil in a FIFA World Cup.

Did you know that this victory by Morocco incited riots in Belgium? The Belgian fans were so upset that they fought on the streets against the Moroccan fans after their team was badly defeated in the FIFA World Cup 2022. Morocco’s victory against Belgium is definitely one of the best moments in the history of the FIFA World Cup. The victory showed that Morocco has an insane defence that can counter any opposition’s attack in football. Moroccan defender Romain Saïss and forward Zakaria Aboukhlal were the men who brought home this special victory.

The videos of Japanese fans cleaning up the stadiums after the matches their team started to surface on social media when Japan defeated the giants Germany in the FIFA World Cup 2022. Since then many videos have surfaced in which Japanese fans can be seen cleaning up the mess at the stadiums after the conclusion of Japan’s matches. It won everyone’s hearts and showed that the Japanese people are a gem in the world of football. The moment showed that not just players but the fans can also inspire.

Tidying up after one of their greatest #FIFAWorldCup wins 👏

While Spain may have lost against Japan in the FIFA World Cup they gave us a startling moment in the World Cup when they defeated Costa Rica by 7-0 in the group stage. Spanish attack completely demolished the Costa Rica side. 6 Spanish players chipped in these 7 goals that created history at the World Cup. These were the most number of goals scored by a team in the 2022 World Cup in a single match. The second-best was Portugal’s 6 goals against Switzerland.

Five-time champion Brazil did not win the FIFA World Cup this year but certainly gave us some memories to cherish. In their group encounter against Serbia Richarlison was on fire as he scored both goals for his team. His second goal was perfection personified. The scissor kick stunned everyone. After Vinicius Jr. put the ball into the box from the left side, Richarlison received it with his left foot before turning and hitting with his right on the volley to score a dashing goal.

Richarlison! What have you done?! 🤯#FIFAWorldCup | @richarlison97 pic.twitter.com/kCKFdlINXq