Thunivu Review: Thunivu is quite enjoyable as long as it unfolds like a heist movie, and a lot of the credit for that goes to Ajith, who uses his charisma on the screen to make his anti-hero character so endearing. 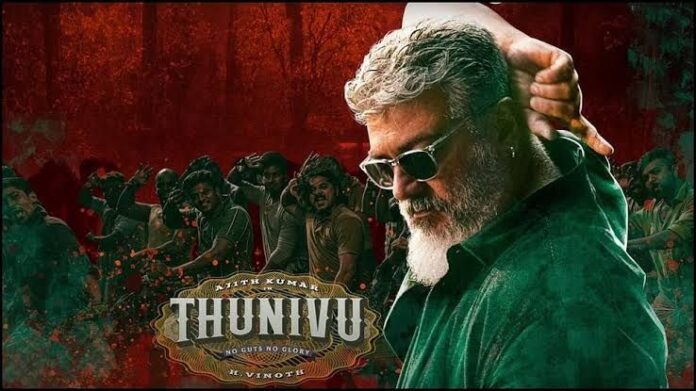 Thunivu Review: Thala Ajith’s latest heist thriller loses its steam due to a lethargic screenplay and a story that tends to get stuck and is plagued by several glaring issues. The movie promised so much but ended up delivering the same old stereotypical thrill and drama you would expect from any other ordinary thriller in India.

Thunivu Story: A criminal mastermind and his team form a plan and commit bank heists across Chennai, but the motive for their heists and the identity of the main mastermind remain mysterious.

The film begins with a gang devising a complex plan to rob one of Chennai’s largest banks. The plan is to carry out a heist worth 500 crores, which the bank has kept in excess of the permissible limit of 1000 crore. Everything goes as planned, and the gang successfully takes over the bank with a large group of hostages. However, trouble arises when one man decides to fight back, only to seize control of the bank from the gang.

That guy turns out to be Ajith, who plays a character with no name. Ajith gains the gang’s trust and makes them work for him. He promises each of them a portion of the 5000 crore bank money that he plans to rob. As Ajith puts his plan in motion, his two-member team, which also comprises Manju Warrier, is quietly pulling strings on the outside. The rest of the film is about what Ajith is actually doing inside the bank and does he really plan to rob it.

Thunivu is quite enjoyable as long as it unfolds like a heist movie, and a lot of the credit for that goes to Ajith, who uses his charisma on the screen to make his anti-hero character so endearing. The movie, however, is more than just a robbery movie because it also has a side plot that makes social commentary on a current subject.

Thunivu has problems just after the intermission block; initially, Vinoth exploits masala cinema’s famous intermission section in a creative way, but the rest of the movie undervalues it. The only real trump card to play with is the mystery surrounding Ajith’s gang and their purpose, and the screenplay begins flowing with information as it should. We understand that they are a successful mercenary gang for hire with exceptional skills.

However, the information about the gang’s past is unimpressive and leaves many unresolved issues. Ambiguity is not the problem; the scenes here are disjointed, and the information provided is unclear. For instance, all of a sudden, we are expected to support two of the gang members based only on what their boss claims.

While it makes an effort to draw attention to the problem, it raises important issues regarding the general public’s irresponsibility. Fortunately, it avoids becoming overly preachy in its message. Thunivu maintains loyal to its genre of heist action, with the exception of the detour it makes in the second half to make its point. There are some cool, slightly extravagant parts.

Vinoth also makes sure that while recounting this story, the movie doesn’t turn into a sermon. In fact, the fact that we never hear a discourse that specifically mentions the gallery is a triumph. The cheers increase louder every time Thunivu points out the daily horrors of banks and how the system manipulates ordinary people, which says a lot. It’s also very intriguing to see how he uses the media in this game while criticising their self-serving goal.

All in all, Thunivu is definitely a one-time watch.

Thunivu is an upcoming Tamil language action heist film which will release in the theatres on 12th January...
Entertainment

Varisu has beaten the box office collection of Thunivu by a huge margin of Rs 18.25 Crores. The...
Entertainment

Thunivu released in the theatres on 11th January 2023, and the film is going to release on the...