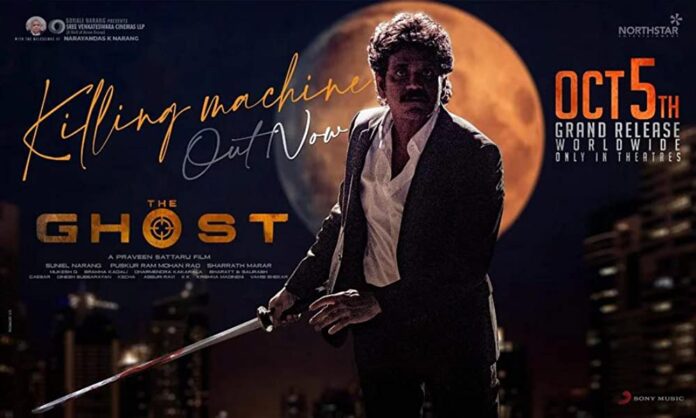 The Ghost starring Akkineni Nagarjuna in the lead role, is releasing in the theatres on 5th October 2022. The film developed great buzz with its teaser in which Nagarjuna was seen with a sword. The insane action shown in the teaser made many people book their seats in advance in theatres for this film. Here we have covered The Ghost Telugu Movie OTT Release Date, OTT Platform, TV Rights and More.

The Ghost starring Nagarjuna has not yet finalised its OTT Release Date. The movie is soon expected to finalise the OTT release after the theatrical release. It will depend on the theatrical response. If the movie gets a good response, then you can expect it to release on OTT in late November.

The Ghost also features Kajal Aggarwal, Sonal Chauhan, Gul Panag, Anikha Surendran and Simmi Ghoshal as the primary characters. The Ghost is an action thriller written and directed by Praveen Sattaru. It is produced by Suniel Narang, Puskur Ram Mohan Rao and Sharrath Marar. The music in the film is Bharatt-Saurabh.

OTT Platform for The Ghost is not known yet. However, the makers of The Ghost are expected to soon release its OTT platform and the OTT release date after the theatrical release. Many are speculating that the movie will arrive on Netflix, but those are just rumours which we neither confirm nor deny.

The film follows a retired RAW officer working in the Indian embassy. One day he receives a call from his sister, who asks for his help to protect her daughter. He then unleashes hell on a crime syndicate while protecting his niece.

Liked the article about The Ghost Telugu OTT Release Date and Platform. Share your views with us via social media handles.

Brahmastra Part One: Shiva is going to release in theatres on 9th September 2022. However, the fans are...