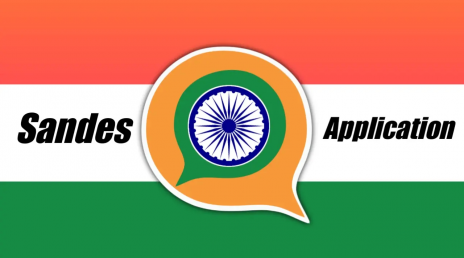 An alternative app to WhatsApp, named Sandes is going to be launched soon in India as it is still in the production stage. Government officials have reported that they have started using the beta version of Sandes. It was announced back in 2020 that the Centre is ready to build an app just like WhatsApp and now the application is ready and currently its beta version is being tested by the officials in different ministries.

It came to know through a source that the officials have started using the GIMS (Government Instant Messaging System) and has been named as Sandes as it has been confirmed by the official GIMS website – www.gims.gov.in. And, it is expected that the name of this application should not be confused with the existing application named, Sandesh, both are different names and applications.

A user can sign-in through the GIMS opening page in many ways like sign-in LDAP, sign-in with OTP, and Sandes web. If you select any of the ways then a message pops-up saying that, “This authentication method is applicable for authorized government officials only.”

The sole purpose to build this application was to migrate government officials to a safe messaging platform where there will be no risk of information leakage as it happens in the case of social media networks that gives rise to security risks. As of now, government officials can freely share any information or circulate it among the ministry as there will be no more risk of the data getting leaked. However, a broader rollout later cannot be rolled out.

NIC Takes Control of The Backend System for Sandes

National Informative Centre (NIC) is taking care of the backend system, that comes under the Ministry of Electronics and Information Technology. The good news is that this application can run on both iOS and Android supported devices. It is also being said that it supports voice and data messages which is similar to other modern-day chatting applications. Here, NIC is acting like a platform that provides the infrastructure to support the delivery of government IT services and the delivery of some of Digital India’s initiatives.


Sandes made a perfect entry at a time like this when everyone started boycotting WhatsApp and started looking for an alternate messaging application after the Facebook owned company introduced its new privacy policy, and it stated that it will deliver or share its users chat with the parent company to improve it and make it more interactive.

The UIDAI (Unique Identification Authority of India) declared on June 4, 2020, that 14,000 Aadhaar Centres have been...
Finance

According to data released by the Union Health Ministry on Wednesday 22 December 2021, Delhi recorded 125 new...
Finance

Losing your PAN card or getting it scratched beyond recognition is something that you should have fear. The...