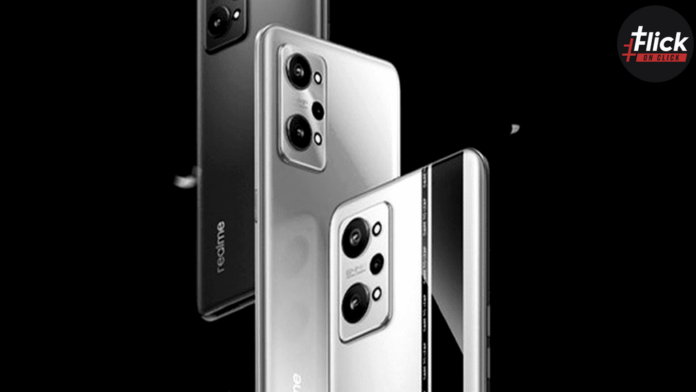 Realme is preparing to introduce more handsets in India under its sequence. The Realme 9i was released earlier this month, and the company is expected to release two additional phones. The Realme 9 Pro and Pro+ are scheduled to be released in India in February 2022. The debut date has yet to be announced by the corporation. Meanwhile, Realme 9 Pro+ concept renders have leaked on the internet. The Realme 9 series will have two versions: the Realme 9 Pro and the Realme 9 Pro+. The former’s design images have already leaked online, and now Smartprix and On Leaks have shown the full concept of the higher-specced Pro+ variant. According to the leaked looks, the two handsets have similar designs with slight changes.

The 9 Pro+ will have a widescreen AMOLED display with minimal bezels, a hole punch scooped out on the upper left corner for the frontal selfie lens, and a chin. In addition, an in-display fingerprint scanner will be used.

The rectangular-shaped enclosure holds the triple camera configuration with an LED flash at the back. The housing is also inscribed with “50MP OIS.” The Realme brand badge is vertically oriented and positioned at the bottom.

In terms of specs, the 9 Pro+ is claimed to boast a 6.43-inch full-HD+ AMOLED screen with a refresh frequency of 90Hz. The handset would also have a MediaTek Dimensity 920 Processor and up to 8Gigabytes of RAM.

The Pro + has three rear camera arrangements that are believed to include a 50-megapixel Sony depth camera, as well as 8MP and 2 MP lenses. In addition, there will be a 16mp selfie cam lens on the front.

According to the reports, the 9 Pro+ would have up to 256GB of internal storage. In addition, the phone is rumored to include a 4,500mAh battery capacity.

The list of rumored features is short but comprehensive enough to comprehend that the  Pro+ will be a high-end phone. The device’s pricing has not yet been revealed, but it is likely to cost more than Rs 20,000, given that the Pro version from last year began at Rs 17,999. According to the rumor, the 9 Pro+ will be available in Sunrise Blue color, Midnight Black, and Aurora Green, variants.

FIFA World Cup 2022 is in full swing in Qatar and the Indians are cheering for their favourites...
Entertainment

One of the very few Indian sitcoms that has mapped its longevity in terms of TRP in Indian...
Lifestyle

Going shopping for clothes and dresses in autumn season can be a real difficult task because the weather...
Entertainment

June Horoscope 2022: Find Out What the Future Holds for You

Everyone prefers to plan ahead of time based on facts regarding their future. However, in reality, it is...
News

The supporters of Ram Mandir throughout the country became a prime witness of the foundation of the temple...