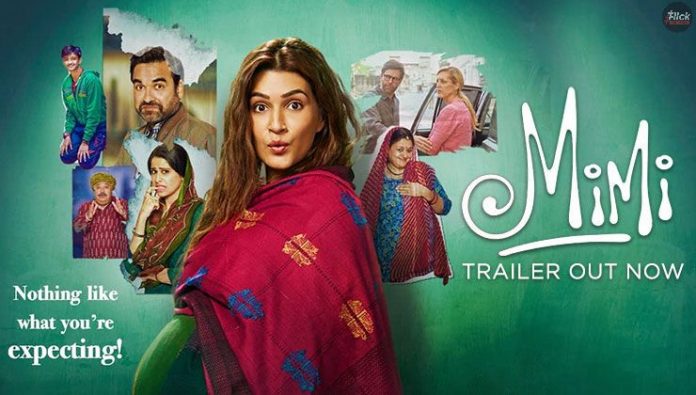 Jolly news for Kriti Sanon and Pankaj Tripathi fans that the most awaited trailer of ‘Mimi’ has been launched today on Netflix India’s YouTube channel. Excitement could be seen on Kriti’s face as she took to social media to release the trailer of the film. One reason for exhilaration rushing in fans could be because they are getting a chance to see the reunion of Kriti Sanon with Luka Chuppi director Laxman Utekar and phenomenal actor Pankaj Tripathi.

The trailer represents pure fellowship that is shared between Pankaj Tripathi and Kriti Sanon, with numerous laughter moments. It is impossible that we will ever get to see Pankaj Tripathi in a movie where he does not land a punch of laughter. Apart from laughter, the film is also a mixture of complex emotions because being a surrogate mother brings many challenges for a woman.

Mimi promises to be the actress’s one of the phenomenal performances to date and we can never expect less than the “Mood Tranquilizer” – Pankaj Tripathi in all his stupendous performances and this time too he has won many hearts in the trailer. The film also stars Sai Tamhankar in a key role.

Kriti also shared the Mimi trailer in his Instagram feed and wrote, “#Mimi expected everything, except for this unexpected journey! Watch the glimpse of her unexpected story with your family. #MimiTrailer out now.” And the post has managed to get almost 1 million views in total after 3 hours the trailer got posted on the actress’s Instagram account.

For those who do not know, Mimi is a remake of the National Award-winning 2011 Marathi film “Mala Aai Vhhaychy!” So let us see how entertaining will be Mimi in comparison with the Marathi film. Kriti Sanon is leading the film as a surrogate mother along with Pankaj Tripathi and Sai Tamhankar.

The complex drama is directed by Laxman Utekar who also directed Luka Chuppi, written by Rohan Shankar, and produced by Dinesh Vijan under his banner Maddock Films. Another cherry on the cake is A.R Rahman’s contribution to music in the film. The film is scheduled for a direct-to-digital release on Netflix and Jio Cinema platforms on July 30, 2021

The story of the film is set in a small town and the trailer begins with an opening scene where Pankaj Tripathi is telling Kriti Sanon how beautiful motherhood is and how lucky are the mother’s that they have an opportunity to give birth to a new life. Tripathi also says if it were possible, even he would also give birth to a child.

One day, Pankaj Tripathi breaks a news in front of Kriti that a foreign couple is looking for a woman who will give birth to their child via surrogacy and in exchange, they will offer 20 lakh rupees. Being a small-town girl, Kriti is unaware of the concept of surrogacy and later gets surprised once she knows about it and agrees to the same.

This is where all the fun begins as everybody is majorly concerned that how will they encounter society when it will wonder how the belly of Kriti is bulging out after some time as she is young unmarried. In order to keep surrogacy, a secret Kriti pretends to be the wife of Pankaj Tripathi and starts wearing a Burkha.

The biggest twists come in when the foreign couple refuses to accept the baby due to some complications. Now, what Kriti will do with the baby? Will she opt for an abortion or will give birth? Whatever decision she takes, one thing is sure that the audience will enjoy for sure with a lot of laughter.

Previous article
The Big Picture, a Show Hosted By Ranveer Singh Coming Soon on Colors TV
Next article
Taarak Mehta Ka Ooltah Chashmah: What’s The Salary Of Every Character In The Show?
Flickonclick

Netflix new Hindi movies arriving in July 2022 on the OTT platform are going to take you on...
News

There are many Web Series Like Jamtara. Some of the greatest desi web series is leading the way...