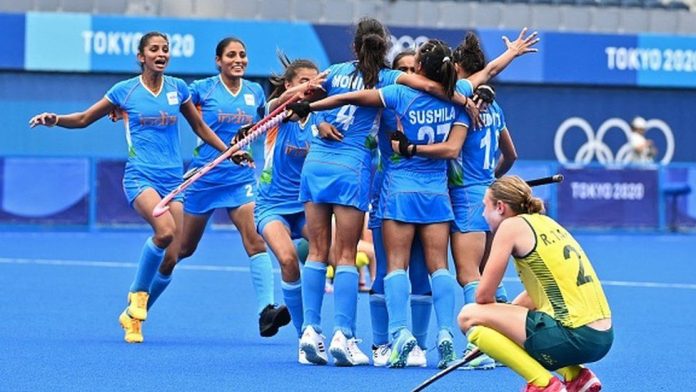 India’s goal in the Tokyo Olympics is to maintain their inspiring performance. India’s women’s hockey team upset Australia 1-0 on August 2nd to qualify for the semifinals of the Tokyo Olympics for the first time in the event’s history. Gurjit Kaur scored for the Women in Blue in the second quarter, and they were able to hold on to their lead and make history.

PV Sindhu had previously won India’s second medal at the Tokyo Olympics 2020, defeating China’s He Bingjiao in the bronze medal match. Meanwhile, on August 3rd, all eyes will be on the Men’s Hockey team, who will meet Belgium in the tournament semifinals.

Manpreet Singh-led team defeated Great Britain 3-1 in the quarterfinals of Tokyo Olympics 2020, ensuring India’s return to the tournament’s final four after a 49-year absence. The previous time India qualified for the semi-finals was at the 1972 Munich Olympics, where they were defeated by arch-rivals Pakistan 0-2.

In addition, India’s athletics squad in Olympics will compete on Tuesday, with Annu Rani competing in the Javelin throw and Tajinder Singh Toor competing in the Men’s shot-put qualification. Sonam Malik will compete in the Women’s 62 kg freestyle category against Bolortuya Khurelkhuu in the Wrestling event, which starts on Tuesday.

India takes against Belgium in the men’s semi-final at Oi Stadium at 7:00 a.m. IST.

Qualification for the women’s javelin throw: Group A – Annu Rani – 5:50 AM IST

If Sonam Malik qualifies for the women’s freestyle 62kg quarter-final,

If Sonam Malik qualifies for the women’s freestyle 62kg semi-final.

A driving license is one of the most required documents one can have if one wants to own...
World News

The Defence Ministry on Sunday announced the ban on 101 items "beyond given timeline". The Defence minister Rajnath...
News

Cyclone Amphan has been in the news to hit Bengal today on May 20. Up until now, the...
News

After the Amphan cyclone in Bengal, another cyclone Nisarga is ready to hit Maharashtra and is anticipated in...
World News

During a Euro 2020 press conference, the actions of the football star Cristiano Ronaldo led to a controversy...