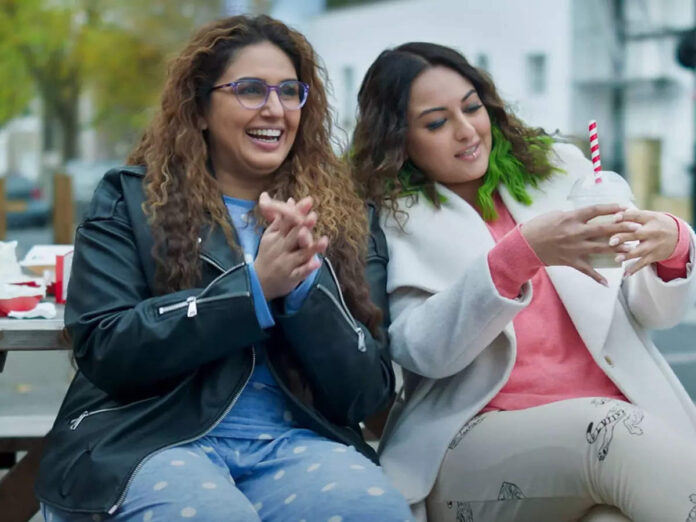 Double XL Movie Review: Huma Qureshi and Sonakshi Sinha are too good to miss out on in this social comedy that puts into perspective the preset mindset of Indian society about plump and chubby women. It’s a comedy well done and thought out before presenting it to the viewers. The premise works, and most importantly, the casting is picture-perfect.

Double XL Movie Story: Two plus-sized women Rajshree Trivedi from Meerut and Naira Khanna from Delhi, set out on a journey to prove that you don’t need picture-perfect bodies to achieve your dreams.

Double XL, a social comedy, never gets too preachy and focuses on its storytelling, leaving behind a few messages on which the viewers can capitalise without having to spell them out. The movie has done very well in this aspect, as most social comedies tend to get too preachy at certain points.

The wonderful premise that society’s expectations can not define your end goals will certainly relate to the youth. Double XL will also appeal to a certain section of society that has often been criticised, lectured, or told to do things according to preset notions or ways. The movie tells the viewers that it’s okay to dream even if you are an oversized woman in the patriarchal male society in India.

Huma Qureshi is, without a doubt, one of the most talented and underrated actresses in Bollywood. She has done a remarkable job with her role, and it seems as though she really loves to live the character she portrays on screen. No one could have been a better fit than her for the role of Rajshree in this movie.

On the other hand, Sonakshi Sinha reestablished herself as a sound and able performer in the Hindi film industry with her hard-hitting role. She is a delight to watch in this film. Zaheer Iqbal is equally brilliant and manages to grab the spotlight even though the movie focuses heavily on Huma and Sonakshi’s characters.

All in all, Double XL is a great, fun film to watch this weekend in theatres.

Established in the 1920s, the RRR movie tells the fictional narrative of Alluri Seetharama Raju and Komaram Bheem,...
Lifestyle

It’s Big B’s birthday, and we cannot be more excited to share something special about the man of...